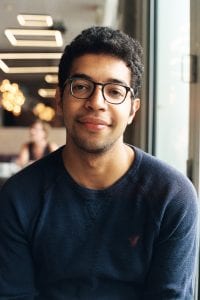 Austin Harris is a Current Programming Assistant at Walt Disney Television. He works alongside the Vice President and Executive Director of Current Programming, contributing to scripts, tablereads, sets, and more. Right now, Austin is working on five current series: Black-ish, Mixed-ish, The Good Doctor, The Rookie, and American Housewife. Austin was a finalist in the 2021 Walt Disney Television Writing Program; his goal is to become a TV and feature writer.

Austin was the editor-in-chief of both the Middle School Murmur and WordsWorth at MFS. In his English classes, he learned to write persuasively. “My English classes, especially Mrs. Galler’s where we wrote persuasive essays, have helped me in writing pitches, summaries, and loglines for projects,” said Austin. Using that persuasion, he convinced former English teacher Mr. Mark Gornto to create and advise a filmmaking elective. Both his academic and extracurricular experiences have prepared him for a career in journalism and media.

Austin attended New York University’s Tisch School of the Arts; he earned his B.F.A. in film and television production in 2017.

“My MFS English classes have helped me in writing pitches, summaries, and loglines for projects.”