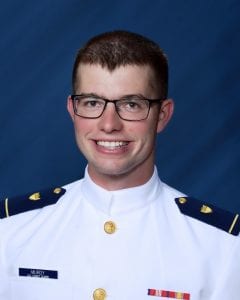 Ensign Josh Murdy serves as a Marine Inspector at the United States Coast Guard’s Marine Safety Unit in Portland, OR. Primarily, he inspects vessels to ensure the safety of the crew, passengers, and onboard environment. In the past, he was able to identify two vessels that had sub-standard safety. “Left unchecked, these issues could have contributed to a future marine casualty with significant harm to the vessel, environment, or most importantly, the crew,” he said. His other roles include Morale Fund Custodian, which deals with finances, and IT Liaison Officer, which deals with technology.

In his limited spare time, Josh likes a little friendly competition. At MFS, he participated in several academic challenges as well as varsity soccer; now, he focuses on chess and enjoys the camaraderie that comes with playing games. Josh appreciated MFS’s academic rigor and diversity; he was able to earn college credit for four courses. He also acknowledges the impact that the Quaker testimonies had on him, citing “simplicity” as the most significant in his life. He continues to benefit from and contribute to MFS’s supportive alumni network.

Josh graduated with high honors with a bachelor’s degree in operations research and computer analysis from the United States Coast Guard Academy.

“The connections built at MFS, whether with classmates or instructors, can have significant professional impacts down the line.”