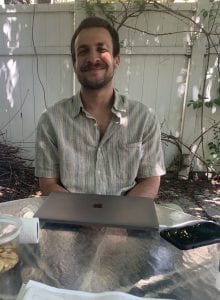 Noah Rubenstein is a playwright and writer as well as an assistant to Branden Jacobs-Jenkins, a Pulitzer Prize finalist and MacArthur Grant fellow. Noah does both short-term administrative duties as well as longer-term research projects and, before the pandemic, script supervision. Last year, he developed his own play during a residency at SPACE on Ryder Farm, a nonprofit organization that combines art with environmental sustainability. As an assistant, Noah has contributed to five full productions that have appeared at off-Broadway and regional theaters.

At MFS, Noah learned that “it’s not uncool to take your work seriously.” Being around like-minded, driven peers helped him transition to an undergraduate workload. “When I got to NYU I was sort of shocked at how much easier it was than high school,” said Noah. “That’s not because I’m a genius (I’m not) it’s because having lots of work didn’t feel like a big deal after going to a rigorous school like MFS. Doing the work was just the expectation.” Though he wishes he had been more involved in student government, his fondest memories come from being the Clerk of Meeting for Worship for Business.

Noah earned his B.F.A. in Dramatic Writing at New York University’s Tisch School of the Arts.

“I think the most valuable thing I learned at MFS was just the simple idea that it’s not uncool to take your work seriously.”