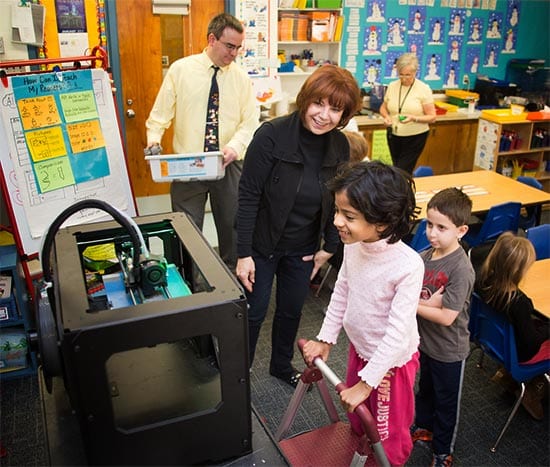 As part of their class unit on snow, First Grade students have the opportunity to use the school’s 3D printer to design and print their own snowmen.

Tim showed the students how the printer works from drawn designs to create its products. The First Graders are now drawing individual snowmen designs, and Upper School students will help them digitize them. The First Grade students will then have the opportunity to watch each of their snowmen being printed, as the 3D printer will be available in their classroom and the Physics classroom throughout the process.

What is 3D printing?

3D printing, or “additive manufacturing,” is the process of making three-dimensional solid objects from a digital file. Objects are “printed” using an additive process of laying down successive layers of material. Each layer is a thinly sliced cross-section of the eventual finished product.

How does 3D printing work?

When creating a new object, the printing process begins with a Computer Aided Design (CAD) file. Existing objects can also be replicated and printed using a 3D scanner that translates what it sees into a 3D modeling program.

In order to print from a digital file, the 3D modeling program slices the final design into hundreds of horizontal layers. The printer then prints the object one layer at a time. It reads each two-dimensional slice separately and layers them into one complete 3D object.

What kind of 3D printer does MFS have?

The 3D printer the First Grade is using is a MakerBot Replicator 2. It uses fused deposition modeling, which means it builds layer-by-layer from the bottom up by heating and extruding thermoplastic filament. The MakerBot takes a CAD file and calculates a path to extrude thermoplastic; it then heats the thermoplastic to a semi-liquid state and deposits it in tiny beads along a path. Where supportive structure is needed, the MakerBot deposits scaffolding material that can be removed after printing.