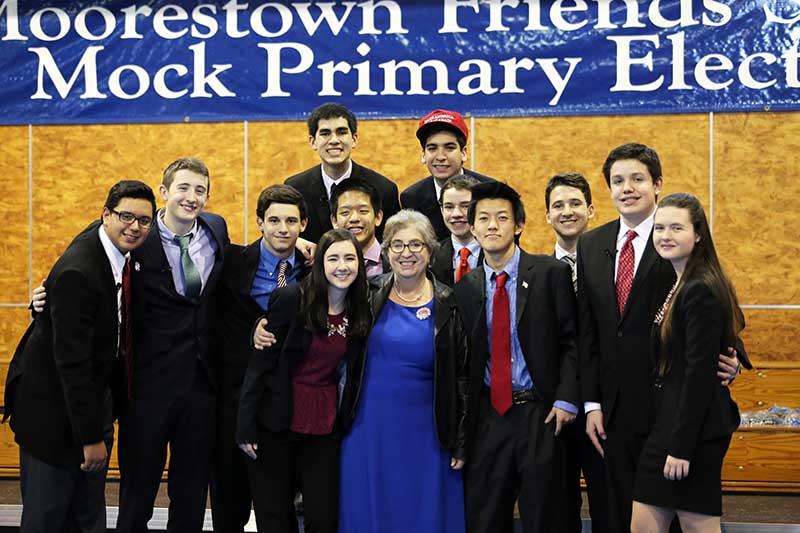 The MFS Mock Primary Election (MPE), on Thursday, January 14, brought Middle and Upper School students together for a unique political learning experience. Although MPE is a special one-day event, work had been going on for months to prepare for election day.

“Leading up to MPE, we attended many town hall meetings, and in order to prepare for those and the major Republican debate on election day, I used a variety of sources to compile information about Jeb Bush and his positions,” said Andrew. “I wanted to ensure that I thoroughly researched his views so that I could properly convey them to a large audience, even though I did not necessarily support Jeb’s positions. Sometimes I found it challenging to convincingly argue them.”

The 12 candidates were not the only individuals investing hours of work in the months before MPE. Campaign managers and campaign staff also played a large role in the process. In September, I had the pleasure of joining Jeb Bush’s team as campaign manager. My role was to help Andrew run his campaign as smoothly as possible by helping him prepare for town hall meetings, ensuring our campaign met all of our deadlines, and developing campaign strategies. On MPE day, all campaign managers sat front row at the debates with our laptops and notebooks, ready to feed our candidates information if they happened to forget something while on stage. On election day, we also helped our candidates staff their tables in the Field House as Middle and Upper School students came by to talk to the candidates.

There was also a unique opportunity for any student to present a ballot initiative. Eight ballot issues were presented; four pertained to national politics, such as requiring cultural competency training for police officers and continuing to federally fund Planned Parenthood, and the other four were directly related to our MFS community, such as changing all single-stalled bathrooms to gender neutral bathrooms and implementing a meatless Monday in the dining hall. Most of the ballot initiatives were presented by clubs or classes, however, individuals had the opportunity to bring forth an issue independently. In the weeks leading up to MPE day, all eight ballot initiatives had informational bulletin boards created around the school, and representatives gave educational presentations to both Upper and Middle School students. On election day, each ballot initiative was provided with a booth in the Field House, and representatives had their final opportunity to speak about their causes with voters.

The 2016 Mock Primary Election was filled with learning and a lot of fun, but hours upon hours of work went into making it a successful event. In addition to the candidates, campaign staff, and ballot issue presenters, many other volunteers hung posters, assisted at voting booths, and served as Secret Service agents for candidates. Election day was the culmination of months of hard work, and clearly, it paid off.