A Message from Retiring Head of School Larry Van Meter 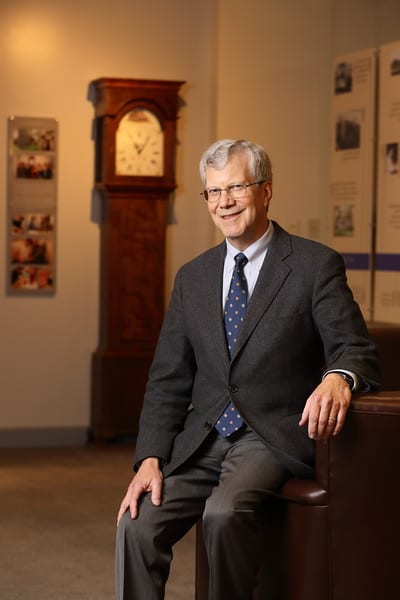 Dear Members of the MFS Community,

After 17 years as Head of School, I found writing this “final” letter to be a challenge.  As my colleagues can attest, I love to tell stories, and it would have been easy to ramble on for much too long.  But the latest issue of Among Friends thoroughly covered my years as head, and there is no need to go into further detail here.  I do, however, want to be sure to state clearly that my family and I are deeply humbled by the School Committee’s decision to rename the historic Greenleaf “mansion” Van Meter Hall.  Much of my life has played out on a two-mile section of Main Street, from my childhood home near Strawbridge Lake on the west to MFS and the Meeting on the east.  My grandmother Van Meter lived her final months at the Greenleaf when it was a Quaker home for the elderly, so this gesture is especially poignant.  My family and I are also honored by the School Committee’s fundraising effort to establish the Van Meter Camden Scholars Endowment, which will help support a program which is deeply important to me and is consonant with the school’s mission.

Earlier this month I celebrated my 50th MFS reunion.  It was an opportunity to connect with classmates and to reflect on what things were like in 1968.  It’s hard to understate the dislocation and uncertainty of that time.  As noted in a recent issue of The New Yorker which focused on 1968:  “We have not, in the past half century, had a year freighted with such emotional and historical heft, in part because we have not seen the convergence of so many defining issues – war, civil rights, populism, political realignment – in so short a timespan.”

Today, we have a different set of concerns, but there is a similar sense of deep unease in the nation and the world.  As The New Yorker went on to say, “…the singularity of 1968 does not diminish its pertinence to our present turmoil.”

For generations, Meeting for Worship at MFS has provided a space and an opportunity for reflection.  Importantly, MFW is not a political forum or town hall meeting.  Instead, it is an opportunity to experience community and, for at least some, spiritual connectedness.

At this time of the year, when the doors of the Meeting House are frequently open during worship, I see MFW as a metaphor for the MFS experience.  We sit quietly but can clearly hear the hustle and bustle on Main Street…cars, trucks, buses, emergency vehicles.  Yet, if one listens really carefully, there are also birds singing and, most days, we can hear the distant sounds of Lower School students joyfully playing outdoors.  Inside the building, it is usually very quiet.  But if one really centers, the squeaking of a century-old bench, the rustle of clothing, the cracking of a knuckle are readily discernible.

The noises outside can be jarring.  There is, after all, a busy, noisy world out there that can be unpredictable and scary.  But the more centered we are, the more we sense the safety that comes from being in a reflective community with friends and teachers.  Ultimately, we all must leave the Meeting House and go back to school, back to life.  Back to The New Yorker’s “present turmoil.”  Sooner or later, we must all leave the cocoon of MFS.  It was that way in 1968, and it is that way today.

Hopefully, we have instilled in our students a sense of optimism, of possibility.  An understanding that MFS graduates, because of our school culture, are uniquely well-suited to be leaders in today’s complex world.  Many will be leaders in local organizations and communities, and perhaps nationally and internationally as well.  Our students have learned the power of consensus-based decision making, of listening closely, and of acting with compassion and kindness — what Robert Greenleaf, a Quaker, described as Servant Leadership.  The world needs Servant Leaders even more today than it did 50 years ago.  The Quaker admonition to “Let Your Life Speak” has never been more important.  I hope that I have let my life in education speak, and I am confident that our students today will find their own ways to let their lives speak.

Heads of school often talk about their work as a lonely job.  But I have never had that experience.  Surrounded by tireless, talented colleagues, a dedicated and effective School Committee led by remarkable clerks, and the absolutely indispensable Ruth Chen, I have benefitted from an extraordinary amount of support.

But most important has been the loving support of my family.  It’s not easy being the head’s kid, but Matt ’03 and Luke ’05 handled that role well.  It’s even less easy to be the head’s spouse, a position that is symbolically very important yet is, at the same time, highly ambiguous.  It takes a special person – a special partner – to play that essential role.  Margaret has not only been a valued teacher and college counselor, but she has been my loving wife, friend, confidante, and companion.  Ours has truly been a team effort.

At Sunday’s Meeting for Worship, I was overwhelmed by the turnout of students, alumni, parents, current and former faculty and staff, trustees, former trustees, parents of alumni, Meeting members, family members, and long-time friends. The strong sense of community and common purpose in the messages that were shared is what I hope, above all else, will be my legacy at Moorestown Friends.