An Intersection of Spanish, Robotics, and Filmmaking 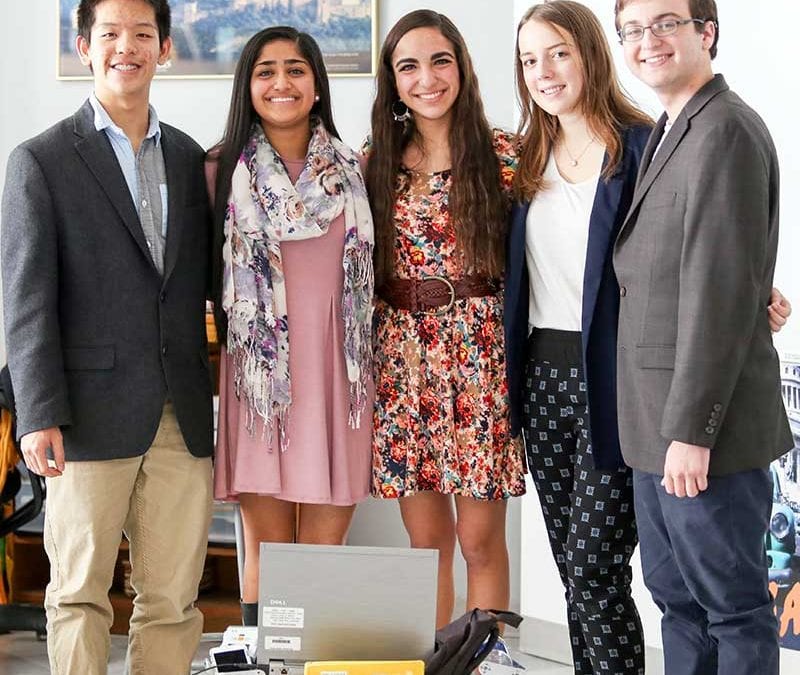 During a 30-minute showcase spoken completely in Spanish, five students in Josie Paolello’s Spanish 4 Honors course presented a summary of their work developing a robot designed to help alleviate lower back pain for students carrying heavy backpacks. The students, Dragon Ding ’17, Alex Horn ’17, Andrea Kinzler ’16, Sarina Patel ’17, and Natalie Zakroff ’17, discussed the medical research they studied documenting lower back problems and described design and programming of the robot. The students also screened a commercial they filmed about their product.

“The advanced vocabulary that the students used when speaking was learned on their own, as the language went beyond the material covered in class,” said World Languages Department Chair Josie Paolello. “They spoke very naturally during the presentation, so you can tell that they really know what they are talking about and nothing was memorized.”

The showcase was the final component of a two-month, project-based learning assignment, in which students were tasked with solving a real-world problem with technology that would benefit the MFS community.

For their project, the students embraced two different types of technology — filmmaking and computer coding.

They filmed and edited the commercial with iMovie and interviewed various MFS students and staff about the usefulness of their product at school.

“One of the challenges of editing the video was aligning the video and audio for the interviews,” said Alex. “Some staff members didn’t speak Spanish so members of our group recorded voiceovers, but it was difficult to slow the video footage so the voiceovers would match.”

Dragon, a member of the MFS Robotics team, took the lead on the programming of the group’s robot invention.

“Computer Science Teacher Gail Barna and Mathematics Teacher/Robotics Advisor Michael Omilian helped our group with downloading the Robotics coding program from the school and construction of our robot,” said Dragon.

The students demonstrated the functionality of the robot as the finale of their presentation, showing how their invention could transport a backpack and other items around the school.

The entire group concurred that finally seeing the robot move was the most rewarding part of the project.