The Beautiful Chaos of Middle School 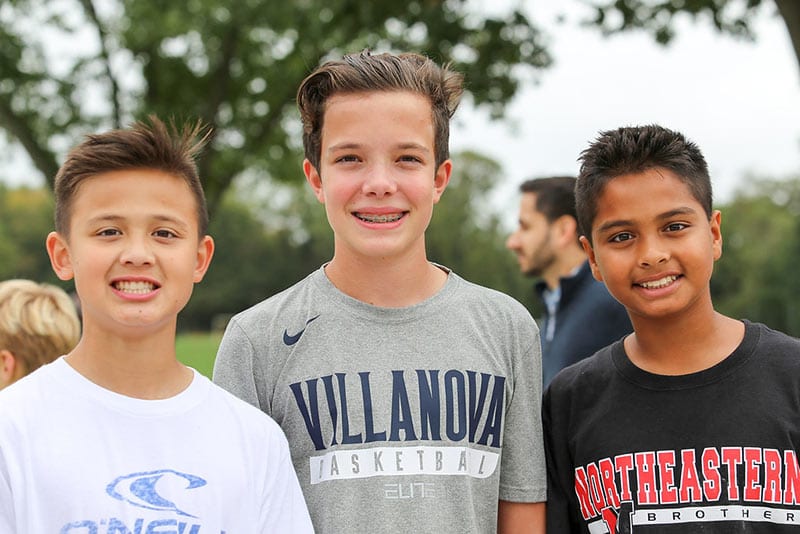 from the desk of Middle School Director Kimberly Clarkson

This past week was the type of week that one looks forward to, all the while knowing it will be hard to stay upright by the time it is over. I call it the beautiful chaos of Middle School! Below are the highlights of the week, squeezed in between regularly scheduled advisory team and faculty check-in meetings, phone calls and conferences with parents, impromptu huddles with students, one of our frequent safety drills, wrapping up textbook selections for next year, and all the other bits and pieces that make a week in the Middle School special.

Monday brought one of my favorite and hardest days of the year. We welcomed to campus the tremendously talented finalists for next year’s Seventh Grade Camden Scholars awards. The students who qualify as finalists have been nominated by counselors in their current schools as standouts in their community, and they and their families have gone through a rigorous screening process. Director of the Camden Scholars Program Dorothy Lopez dedicates countless hours to our prospective and current Scholars, and runs a tremendously organized application, visitation, selection, and support process. Her commitment to our school and this program is part of what makes it such a success for the Scholars and our community. Finalists visit campus, hosted by current students. They have the opportunity to eat lunch with our current Scholars and spend a fair amount of their day meeting with the individuals on the selection committee. I am sure it is exhausting for them!  The selection committee meets at the end of the day to share our experiences and work to consensus. We move forward with the faith that we are making a life-changing decision that will enrich our Moorestown Friends community by adding extremely talented new students!

Tuesday morning brought our final official Admissions Open House for Middle School families interested in Moorestown Friends School for next year. While less formal than the other open houses, it is always fun to meet families who want to learn more about our school and to be able to highlight the strengths of our remarkable program. I was able to share specifics of our world language offerings, the varied options students have during Activity period, how supportive our Middle School athletics program is, while preparing athletes for our competitive Upper School athletics program, as well as details about how our Middle School advisory program nurtures and supports the social-emotional growth of our students. During our in-session Open Houses, visitors get a sneak peek at our special beautiful chaos in Middle School that they can’t see during weekend visits. Throughout the day I was able to drop in to a number of classes, including 5th Grade Genius Hour where students were providing feedback on peer proposals in a “Shark Tank” style format, 6th Grade History where students were beginning work on their Living Wax Museum projects for May Day, and 8th Grade Spanish where students were composing “Tarjetas de un país hispanohablante.” I think I even had the time and good fortune to eat lunch in the Dining Hall!  My Tuesday was capped off by subbing in a 6th grade PE class, where students enjoyed a lively game of kickball after refreshing my memory of the rules. It has been a few years since I have played!

Wednesday started with our Middle School Musical preview for students. We all enjoyed a brief glimpse of the fantastic performance to come on Saturday and the audience was enthusiastic and supportive of the hard work their peers have put in to the show. In addition to meeting an admissions visitor who was on campus, the wonders of technology allowed me to meet, via Skype, applicants living on the Arabian Peninsula hoping to join us next year.  While certainly a different dynamic than a face-to-face interview, it is remarkable how easy it is to connect and interact globally in our current world. Wednesday afternoon offered a few moments for me to catch my breath and follow up on emails and phone calls, but I am sure there was much that went overlooked this week! Again, the beautiful chaos of Middle School!

French Fun Day was a highlight of Thursday. This new event, coordinated by our World Languages department, primarily through months of hard work by French teacher Mme. Murphy, welcomed dozens of students from local middle schools to campus. The format included Afro-Haitian dance performances and workshops, as well as workshops led by our Upper School French students. For MFS Middle School French students, the event concluded with a Meeting for Worship to reflect on the themes of culture, language, and heritage. You can read more about the event at this link. All sixth grade students and all 7th and 8th grade French students participated in this dynamic day from 8:45 a.m. through 1:30 p.m. The rest of the Middle School students participated in their regularly scheduled weekly Meeting for Worship, with this week’s opening and greeting handled by Mr. Greenberg’s advisory, who encouraged us to reflect on the curveballs thrown at us by the beautiful chaos of Middle School.

Friday was a B Day, which meant it included an Administrative Council meeting with the school’s senior administrative team, a Middle School Team meeting, with the core group that monitors the social, emotional, and academic well being of our students, as well as a Middle School assembly! The assembly was our annual Interfaith Assembly, coordinated by the Religion Department. This year we had a panel of Upper School students who shared reflections on the role of their religion in and the impact of religious experiences on their lives. It was a powerful opportunity to hear a diverse range of backgrounds and experiences represented by our remarkable student body.

After a full school day, just as most of the Moorestown Friends School community was heading out for the weekend, organizers of the Philadelphia (South) Regional Finals of the National History Bee were arriving on campus to set up for a lively and long evening. This was the first time MFS has hosted this event, which brought over 200 participants and their families from as far as the Lancaster, PA and Wilmington, DE areas. Campus was bustling, with the elementary division (where MFS was represented by Himanshu, Sonia, and Avani) leading off, followed by the 7th grade division (Max, Sreehita, Jenna, and Aidan), and finally the 8th grade division (Colin). Students started their session by checking in with organizers, where they received an info booklet in which they noted their buzzer competition room and seat assignments. They then proceeded to the Auditorium for an opening orientation session, where the schedule and competition rules were reviewed. The first competition was a paper and pencil test in the Dining Hall Commons, followed by two separate buzzer competitions in Middle and Upper School classrooms. Each division culminated with an awards ceremony back in the Auditorium, where the names were announced of students who qualified for Nationals, and the top eight qualifiers were presented with medals. The “Top 8” proceeded to a Championship Buzzer Round, to determine the regional champion. It was a thrilling evening, with all eight of Moorestown Friends’ participants qualifying for a spot at the National Finals in Atlanta on May 31, June 1, and June 2.  Himanshu and Colin walked away with medals for finishing in the “Top 8” in their division.

Not to be outdone by the excitement of Friday evening, the cast and crew of Freckleface Strawberry, this year’s Middle School spring musical, arrived on campus at 2 p.m. on Saturday for an afternoon of rehearsals leading up to the full performance. Performers have been preparing since the fall during Activity Period for this annual event. Under the guidance of Mrs. Wertner and Mr. Wadley, this fun children’s performance was a great selection. On  Saturday, an eventful several hours of all-hands-on-deck activity included costume and prop adjustments, reviewing blocking and cues, ushering a pesky wasp outside, preparing programs, setting up concessions, practicing with the light and sound boards (our new Middle School Tech Crew helped out with the show), and a little time squeezed in to grab dinner before the show. After numerous run-throughs, students were ready for their moment under the spotlights when the curtain came up at 7 p.m. The delightful, dynamic performance was the cherry on top of a long week, and I found myself humming “Who, who, who, is the kid in the mask?” in the car on the way home. Another week immersed in and fulfilled by the beautiful chaos of Middle School.