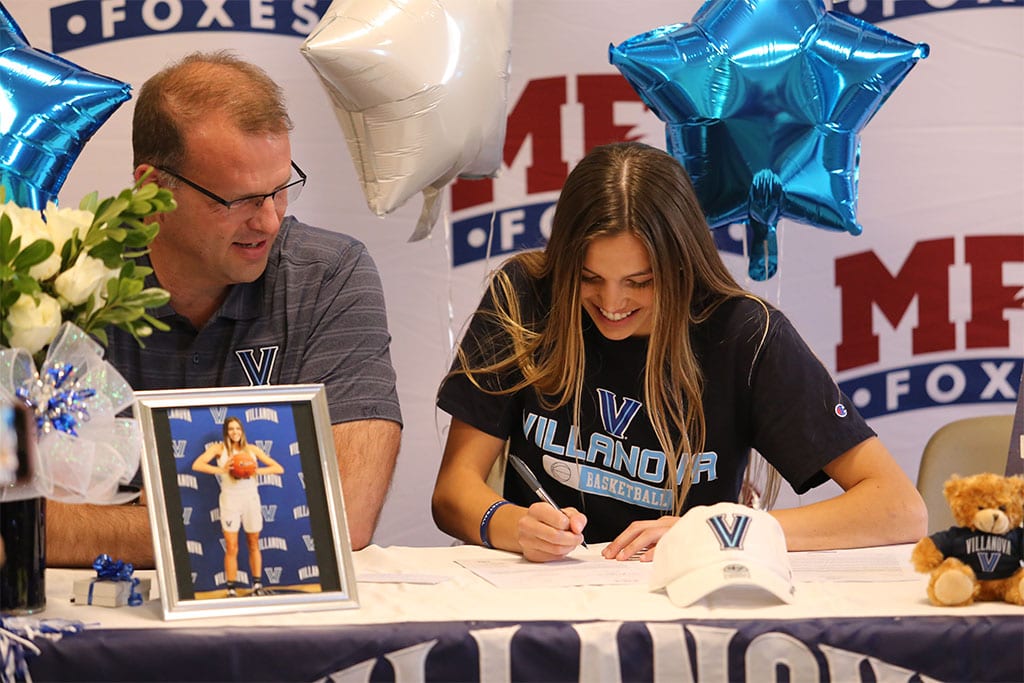 The Athletics Department held a celebration on November 13 for Bella Runyan ’20 who signed a National Letter of Intent to play basketball at Villanova University.

Below are excerpts of remarks from Athletics Director Danielle Dayton:

“Bella is a team-first player and she will be the first to point to the great teams she has been a part of:

“In lacrosse, Bella is a three-time 1st Team Friends League All-Star and has been the team MVP the past two seasons. This past season she led the Foxes to the sectional championship game. She has already surpassed the 100-goal plateau.

“But it’s the basketball court where Bella’s passion deepest passion lies. She has been the catalyst for the winningest era of basketball in school history. In her first three years, the Foxes have won 60 games and appeared in the Friends School League championship game and in the prestigious SJIBT Final Four. Bella has received numerous midseason and postseason awards in her three years and is already the program’s career assists and steals leader. She has been named to the SJIBT All-Tournament team the past two seasons. She was recognized as All-County the past two seasons. Last year she was named All-South Jersey by the Al Carino Basketball Club and Courier-Post. She has been selected as Team MVP the past two seasons as well.

“The entire school community is VERY excited about what lies ahead in the upcoming basketball season for Bella and her teammates.

“Finally, what I would like to make clear about Bella is that she is the ultimate teammate. She is not about individual statistics and awards, she is a natural leader who is always working hard to make those around her better on and off the field and court. She conducts herself with the utmost respect toward teammates, opponents, coaches and officials. We have been lucky to have such a gracious, humble student-athlete representing our school these past four years on some of the biggest stages.”