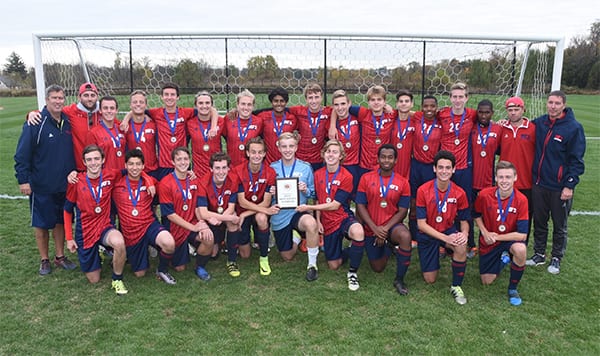 After 100 minutes (80 minutes + two 10-minutes OT periods) of scoreless soccer, Academy of the New Church (ANC) and Moorestown Friends found themselves in a penalty kick shootout to decide the Friends Schools League championship. It was the Foxes third PK shootout in five days. After the best-of-five shootout concluded 3-3, the teams moved into sudden-victory rounds. Finally at the 12th kicker, the match was decided as MFS senior Ivo Iovanovitch buried his kick to the left side of the goal and the host kicker’s shot clanged off the crossbar sending the Foxes to an 8-7 victory in the shootout. MFS goalie Teddy Kinzler registered nine saves during the game and several more during the shootout.

Amazingly, this was the fourth game in six days for the Foxes, all of which went to overtime and three of which ended in a PK shootout.

It is the first Boys’ Soccer FSL championship for the school. The league was founded in 1981. Next up for the Foxes is an NJSIAA quarterfinal match at Gloucester Catholic on Tuesday at 2 p.m. at the Patrick Peyton Athletic Complex in Sewell, NJ. View bracket.