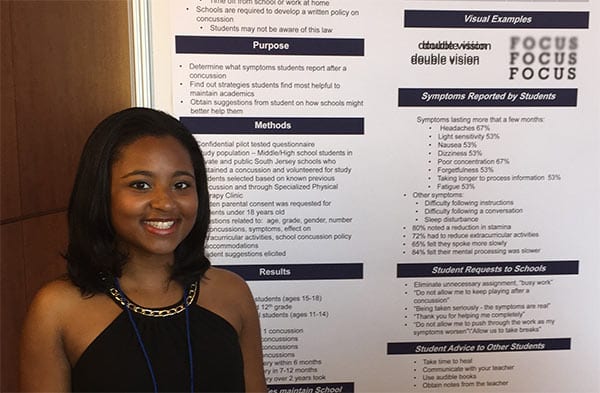 Moorestown Friends senior Bria McKenzie presented independent research at the American Occupational Health Conference in Baltimore, MD, on May 3. Susan Batastini, the MFS Coordinator for Educational and Psychological Services, served as Bria’s advisor for the project.

The poster presentation was based on her MFS Senior Capstone Project, “Symptoms and Effects of Concussions in the Student Population.” Bria has conducted research over the past year in order to learn more about how students suffering from concussions handle their school responsibilities.

“Last year, I developed a concussion questionnaire for students from MFS and neighboring schools to fill out,” said Bria. “After developing and pilot testing the questionnaire, I gathered results throughout the summer. About half of the students attended public school and half private school. From there, I analyzed the data and found some trends – accommodations kids used and how they sustained their concussions (mainly through sports).”

By December, Bria had gathered sufficient data to submit an abstract to the American Occupational Health Conference, and her scientific poster was accepted to the conference.

“I think that adding a student’s perspective on the issue is helpful,” said Bria. “More than half of the concussions I studied lasted for more than six months, and most of them were from high school sports.”

Bria hopes her research will people better understand concussions and how they affect teenagers.