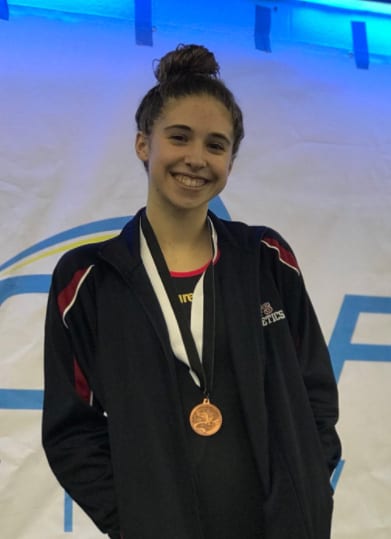 Three MFS swimmers traveled to Lancaster on February 16-17 to compete in the Eastern Interscholastic Swimming and Diving Championships at Franklin & Marshall College. The meet is attended by hundreds of swimmers from independent schools up and down the eastern seaboard with trials held in the morning and finals in the evening (24 swimmers qualify to swim in the evening finals in each event)

Christina Levins ’21 earned a bronze medal in the 100 breaststroke in a Friends Schools League record time of 1:04.62. She also placed 7th in the 200 Individual Medley. Her time was less than two seconds off of All-America status.

Also competing for the Foxes were Evan Fenska ’19 and Allison Fenska ’21. Evan qualified to swim in the finals in the 100 breaststroke finishing 24th. Allison finished 10th in the 50 freestyle and 24th in the 100 butterfly.