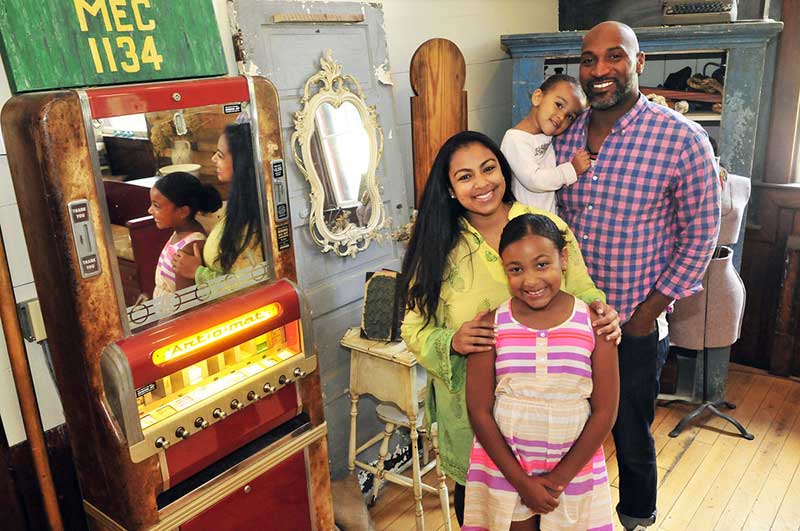 Duran Searles ’99 and his wife, former Annual Fund Director Kristy Searles, were recently featured on NewportRI.com. In the story, they detailed the philosophy of their business, Painted Karma, in which the couple restores and recycles furniture and household items, as well as custom-designing many of their own pieces. Below is the article that was published on October 5, 2016 or view the article on NewportRI.com.

While repurposing salvaged wood can give your home a one-of-a-kind look, it also has the benefit of allowing homeowners to incorporate a little green living into their lifestyle.

In these days of our “throwaway society,” reclaimed wood is a popular choice for craftsmen working on flooring, beams, wall treatments and doors. And over the years, repurposing has evolved to include the restoration and recycling of vintage and antique furniture, adding life to items that may have otherwise been tossed and lost forever.

While many makers still may be trying to get on board with these trends, others have already taken the art in a new direction. Here, we share with you artists who are at the top of the reusing and recycling game: Meet Duran and Kristy Searles of Painted Karma in Wakefield, and Jeff Soderbergh of Custom Sustainable Furnishings in Middletown.

Painted Karma is the brain child of Duran and Kristy Searles, who have been in business for more than a year. The couple restores and recycles furniture and household items, and they also custom-design many of their own pieces.

“We want pieces that are able to tell a story and have character, pieces that are solid to last a lifetime and that are affordable,” Kristy said. “The most beautiful thing for us is to bring a client’s vision to fruition. The piece then has character, tells a story, has new karma, and becomes more than an accent piece — something that can stand on its own.”

The various items used in the Searles’ works arrive by many means. The couple goes “picking” at various locations, travels to auctions and often times finds pieces left at the doorstep. When the store first opened, Kristy said they found a World War II trunk outside the front door with a sign, “Welcome to the neighborhood.”

The two work hand-in-hand, with Duran taking on construction and building, and Kristy handling the artwork and painting. Duran also works on the lighting and audio components of the works.

“Every single piece is done by the two of us,” Kristy said. “We applied for the artistry exemption because we make everything ourselves, and because our exemption was granted, people don’t have to pay tax.”

The couple has been together since they were in their teens, when they went to Quaker boarding schools and both attended Franklin & Marshall College in Pennsylvania. Duran majored in psychology and public policy, while Kristy majored in theater, dance and film — not exactly the line of studies you would expect two artists to take.

“We worked in our fields for 10 years,” Kristy said. “We owned our own house, and we would go out looking for pieces for it; nothing ever fit. We would say, ‘This is cool, but if it could be this color or texture …’ We did all our own remodeling for our own house, and that’s where it kind of snowballed as a hobby. I had woodworking all around me growing up at home, due to my father’s woodworking business.”

Kristy said their business grew over time, beginning in 2005 with recreating items for their own gratification. They began to branch out, doing work for family and co-workers.

“We don’t just restore, we custom-build,” she said. “We want to make (new pieces) with the same integrity as those older pieces. It’s unfortunate that a lot of furniture you buy now isn’t made that way. We go to the mill and get wood and build armoires, coffee tables, and so on. People come to us with their vision and needs. Then we go to the home, and measure and build it custom for the client.”

They say certain items are very hot right now, including the vintage boom-box luggage and lighting features,” Kristy said. “Everything that we do custom is what flies out of the store — custom farm tables that we’ve built out of sewing machines are unique. We’ve gone into people’s homes and built storage, and done interior design work as well.”

The store has several specialty collections, including its line of Latimer lamps. The name “Latimer” pays homage to a member of Thomas Edison’s team — Lewis Latimer — who invented a way to lengthen the life of the filament to make the bulbs less expensive and more efficient. “We do a lot of lighting with a lot of unorthodox things, and with a dimmer,” Kristy said. Lamps have been created from chunks of live Claro walnut, brass owls on a wooden box, a vintage copper Hotpoint heat lamp, an old kerosene lamp and Mason jar wall sconces.

Painted Karma, which earned a 2016 Southern Rhode Island Chamber of Commerce Choice Award, also specializes in restorations of heirlooms. Clients bring in a special piece that belonged to a relative to be converted into something of use and value to their current lifestyle. “People have been moved to tears when they see their family heirlooms made into something useful instead of wasting away in the basement,” Kristy said.

“The name Painted Karma felt so appropriate for what we do, converting pieces and giving pieces new life or karma.”