Emma Baiada ’10 Serves on Production Team for Mister Rogers Documentary “Won’t You Be My Neighbor?” 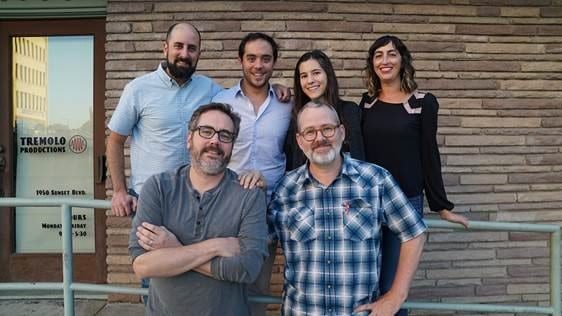 Photo: Emma Baiada ’10, pictured second from right in the back row, appears in this picture with crew members from “Won’t You Be My Neighbor.” Director Morgan Neville stands in the front row at right.

For Emma Baiada ‘10, a successful filmmaking career started with a box full of ideas.

“From a young age, I was always very interested in how other people live their lives,” she says. Baiada jotted down everyday observations and potential subjects, keeping track of them until their stories might one day be told.

At MFS, she realized that filmmaking was the artistic medium for which she had been searching.

“Moorestown Friends really instilled a sense of openness and the ability to be an observer,” she says. “That’s a lot of what documentary filmmaking is to me.”

Baiada made several short films at MFS and continued to pursue her craft at the University of Pennsylvania, where she graduated in 2014 with a double major in Cinema Studies and Communications. At her first job – an assistantship through Beverly Hills talent agency WME – Baiada met Academy Award-winning documentary filmmaker Morgan Neville.

Within a few months, she was hired as Neville’s assistant at his production company Tremolo. In 2016, Tremolo started production on Won’t You Be My Neighbor, a documentary about beloved television host Fred Rogers of Mister Rogers’ Neighborhood.

“I spoke up and said that I wanted to work on that project,” Baiada says. “Something about Fred was so powerful and nourishing and I just wanted to live in that world.” Baiada joined the project as associate producer and began a cross-country journey to tell Rogers’ story.

In addition to scheduling, interview planning, and festival distribution, Baiada was responsible for collecting all of the film’s archival material. She traveled to the Fred Rogers Company in Pittsburgh, combing through hours of film footage and thousands of meticulously organized fan letters. The thematic content of these materials gave the film its unique shape and form.

“We wanted to hit on the emotional areas that he was dealing with that were so salient to both children and adults,” she says.

Response to the film was ecstatic from its festival premiere to theater screenings nationwide. In August 2018, Won’t You Be My Neighbor became the highest-grossing biographical documentary of all time with $22 million in United States ticket sales.

“It has been really humbling and comforting to know that [Fred’s] method speaks to so many people in the country and beyond,” Baiada says. “I think the film plays so strongly with an audience because it feels like group therapy. The energy is palpable in the room and everyone is laughing and crying.”

Baiada continues to work as Neville’s assistant and is currently associate producing a documentary miniseries about music and creativity. As opposed to Neighbor’s research-heavy production, this series involves complex scheduling and technical coordination, a different skill set that Baiada is eager to learn and embrace.

Even amidst a busy filmmaking schedule, she still feels a close sense of connection with MFS.

“The curiosity was there and it developed as I went through school,” she says. “Moorestown Friends really taught me how to reflect and be open to all sides, to all kinds of people, to all kinds of stories.”