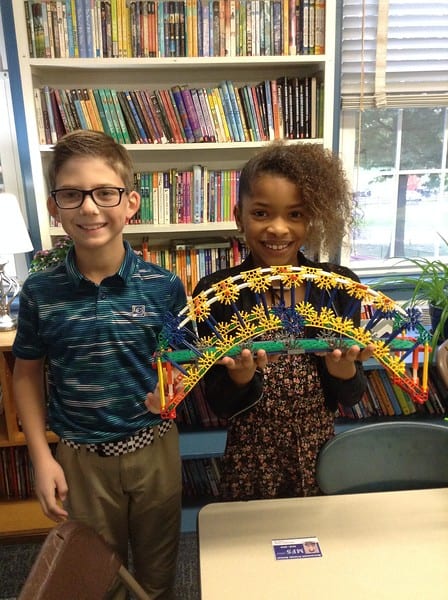 For Sarah Rotter and Emily Gojman’s fourth grade classes, bridges have become a unit-wide link to many different forms of learning.

Several weeks of research, design, teamwork, and creativity culminated in a recent trip to the Benjamin Franklin Bridge. Both classes began the unit by creating bridges out of a unique blend of materials.

“[Students] had to build a gumdrop toothpick bridge across two chairs,” Mrs. Rotter says. “It was a six-inch ‘gorge’ and they had to make sure it could hold 120 pennies. Some were successful and some were not. So they learned a little bit about how different shapes, like a triangle, are actually stronger than others.”

The Ben Franklin Bridge trip allowed students to visit the Delaware River Port Authority, hear firsthand from a professional engineer, and walk halfway across the structure (which spans approximately 9,570 feet!). Upon their return, the fourth graders built beam bridges out of K’Nex and were given the opportunity to craft more intricate models like suspension bridges. Academic Technology Coordinator and Portal Content Director Diana Day also visited to build a bridge using a 3D printer.

Students’ final projects for the marking period split them into small groups for research (and ultimately a presentation) about a famous bridge, such as the Golden Gate or Brooklyn Bridge.

“It used to be legal to ride horses across the bridge.” – Cole

“There was a whole track under the bridge meant to be used for trolleys, but no one ever used it.” – Aodhan

“It used to be called the Delaware River Bridge.” – Peyton

“There’s only six lanes for traffic. [When it opened], one was for the horses!” – Maya