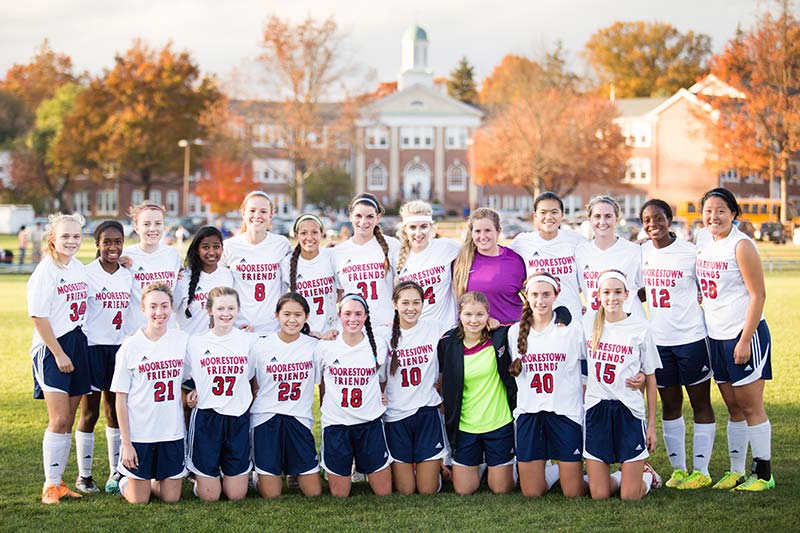 Two goals by freshman Kieran Lees and a goal by senior Vanessa Kara lifted the Moorestown Friends Girls’ Soccer team (13-5-1) to a 3-1 victory over Holy Spirit on Tuesday, November 11.

The host and top-seeded Foxes jumped out to the lead in the 23rd minute when Kara played a beautiful pass to Lees at the top of the 18-yard box. Lees calmly pushed the ball to her right and drove the ball into the net.

The remainder of the half was played largely in the midfield with the hosts carrying possession.

In the 46th minute, Lees struck again when she pounced on a loose ball in front of the Holy Spirit net after a scramble resulting from an MFS corner kick.

Holy Spirit, the fourth seed in the tournament, drew a goal back in the 59th minute, but that was the only tally of the day for the visitors.

MFS had a slight edge in shots, 9-7, and goalie Gaelyn Gregory made five saves.

MFS now travels to Holmdel High School tomorrow night for the NJSIAA Non-Public B South final at 7:30 p.m. They face sixth-seeded Gill St. Bernard’s (12-9). The winner of that match will play for the state championship on Sunday at Kean University against  the Non-Public B North champion (Morristown-Beard or Villa Walsh).

Read the article about this game in South Jersey Sports Digest.

View photos from the game!