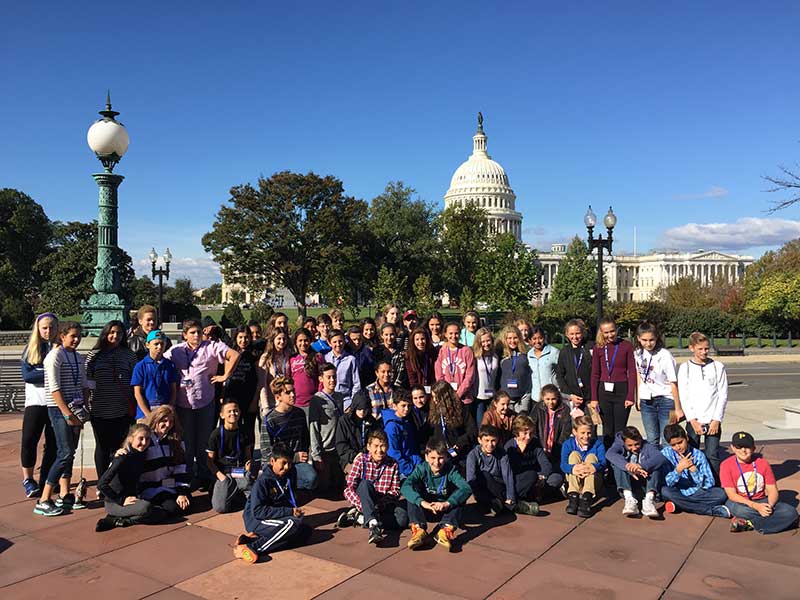 The seventh grade traveled to the nation’s capital from October 27-28. The newly designed field trip was led by Middle School Director Kimberly Clarkson and Middle School History Teacher Jake Greenberg, with significant input from a chaperone group including Deb Casne, Karen McHugh, Jen Murphy, Dan Christy Randazzo, and Karen Washington. The students visited museums, monuments, and more to learn about U.S. history. Tyler Mininno ’22 and Samuel Reyes ’22 provided an in-depth look at the trip from a student’s perspective and provided the article below.

Two buses full of seventh graders left Moorestown Friends School on a Thursday morning headed for one of the most historic cities in the East Coast: Washington D.C. When our two buses of excited children arrived at the Smithsonian Museum of Natural History, our tour guides Joe and Sherry from Gerber Tours, boarded the buses and informed us of our schedule for the day. In the museum we saw beautifully formed gems and minerals, including the 45-carat Hope Diamond, and the Dom Pedro Aquamarine (10,000 carats). In the Smithsonian, we also discovered a full-size T-Rex skeleton that was dug out of the ground in Montana. Seventh grade student, Lauren Edelstein stated, “I really enjoyed seeing the Hope Diamond, because it was interesting and beautiful to look at.”

After lunch, we had a preview of what was to come when we went sightseeing on the bus and looked at the Capitol building. Next, we visited the National Museum of the American Indian, which was the most architecturally intriguing building that we visited. Four floors contained facts and artifacts from the Inka to the Lenape to the Hopi and we worked in groups to do research. “In the museum my personal favorite part was a section on the Inka,” said Tyler. “Their use of engineering and human environment interaction to grow and thrive was very interesting to me.”

We next visited the Kennedy Center. We had a guided tour through the opera house and the Symphony Hall. After, our tour guide led us to the roof of the Kennedy Center where we had an incredible view of Washington. This was student Lia Marshall’s favorite part of the trip, and she said, “I really liked going to the Kennedy Center, specifically seeing the cool ceilings and chandeliers. Walking out on the rooftop of the building and seeing the view was absolutely breathtaking. To me, there was something really special about that place.”

After dinner we took the bus to the Franklin D. Roosevelt monument and walked around the edge of a lake under the stars. “I was in awe as the moonlight shone on several of the statues,” said Samuel. We also visited the Martin Luther King, Jr. monument, carved beautifully from a large stone. It was quite quiet at the monument, and we could tell everyone had great respect for Martin Luther King, Jr. and his memorial.

The next morning, we had a nice breakfast buffet at the hotel, and then embarked on our journey to the Capitol building. At the Capitol, we received a guided tour, learning about the building’s history and architectural elements. We also saw all of the state sculptures (two for each state) and learned why New Jersey chose Richard Stockton and Philip Kearny to represent the state.

From the Capitol building our group walked through a tunnel which took us across the street to the Library Of Congress. In the Library we saw some of the old books and manuscripts which were the first pieces of the library’s collection.

From there we took our bus to the Museum of African American History. When we got inside we ate our lunch, and then entered the exhibit. The way it was set up was very interesting. You start in an elevator which “takes you back through history.” You begin with slavery and African captives, and as you slowly move back up you “climb through time” including the Civil Rights movement and ending back at the top with present day. In the exhibit we learned about the extreme prejudice and mistreatment African Americans had to live with. “The museum was quite emotional for some students and I could see why,” said Samuel.

After we had gone through the exhibit we had a brief Meeting for Worship to take in and appreciate all we had learned. Student Ryan Mullock summed up that our trip as “an incredible experience, which I hope others enjoyed as much as I did!”