Ian Alteveer ’95 – “Art Can Speak in Many Different Ways” 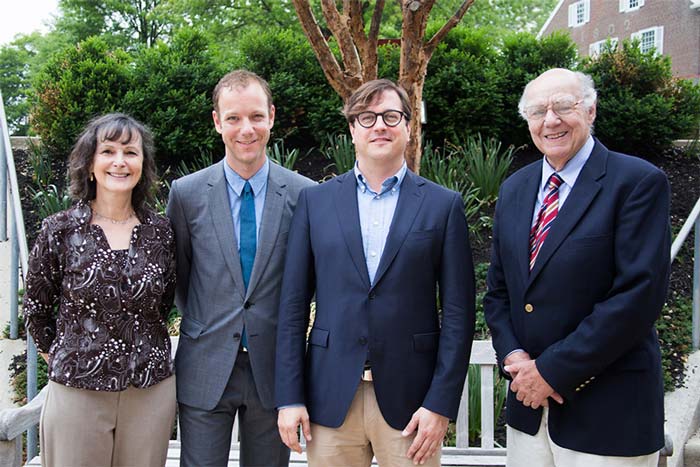 Alteveer is an associate curator in the Department of Modern and Contemporary Art at The Metropolitan Museum of Art in New York City. He is the curator of the Met’s current Roof Garden Commission: Dan Graham exhibition as well as last year’s Roof Garden Commission: Imran Qureshi exhibition. He was part of the team for the Met’s Regarding Warhol: Sixty Artists, Fifty Years (2012), which traveled to the Andy Warhol Museum in Pittsburgh. Other notable presentations Alteveer worked on at the Met include: Ellsworth Kelly Plant Drawings (2012), Richard Serra Drawing (2011), John Baldessari: Pure Beauty (2010), Francis Bacon: A Retrospective (2009), and Jasper Johns: Gray (2008).

Prior to the Met, he was a graduate curatorial fellow and curatorial assistant at New York University’s Grey Art Gallery.

Alteveer entertained and educated the audience with a visual presentation exploring works with which he has been involved, including the exhibits on the museum’s roof garden. He covered both the technical and inspirational aspects of a number of the Met’s works on display.

“[The Met] is an absolutely stunning place,” he said. “There are over two million objects from over five thousand years of human endeavor from all times and all places. It is with this extraordinary weight of the world that my colleagues and I in modern and contemporary art look to work of the present.”

He expressed gratitude for the opportunity to discuss the arts with students and their guests.

“As someone who works in the arts, it is always a pleasure to see an institution recognize the humanities,” said Alteveer. “One fears that more and more, the humanities are getting lost in a world of technology, scientific progress, and world disasters… art, like language, can speak in many different ways, and sometimes heal wounds and sometimes change the world.”

Alteveer has an undergraduate degree from Stanford University and completed his qualifying exams for a Ph.D. in art history at NYU’s Institute of Fine Arts. He is also a critic at the Yale University School of Art, where he teaches critical theory to first-year M.F.A. students during the fall semester.