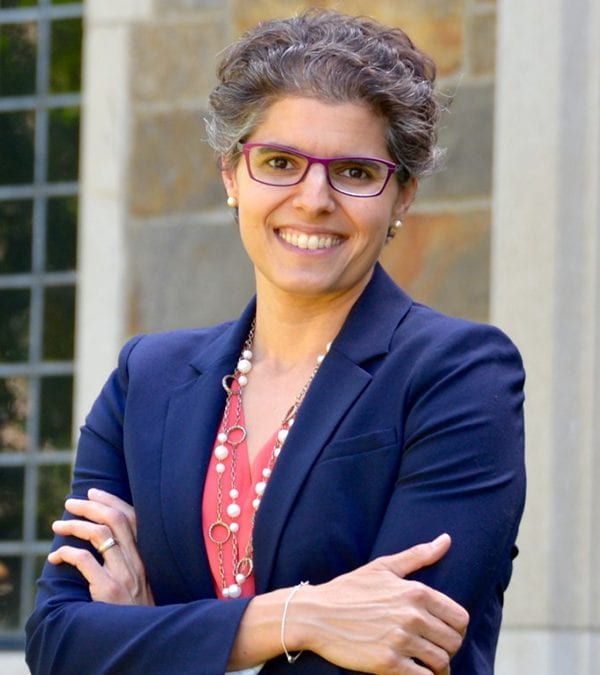 The Moorestown Friends School Committee (Board of Trustees) is pleased to announce the appointment of Julia de la Torre as the next Head of School. de la Torre is the ninth Head of School in what is considered the “modern era” at Moorestown Friends (post-1920, after the school reconsolidated on one site). She currently serves as Head of Upper School at Greenhills School in Ann Arbor, MI, and previously served as the Executive Director of Primary Source, a non-profit focused on global education and citizenship.

“Julia’s energy, warmth and ability to relate genuinely with each person she met impressed everyone during her visit,” said School Committee Clerk (Board Chair) Barbara Rose Caldwell. “She brings both a deep commitment to the values and program of Moorestown Friends School, along with a unique perspective and vision for our future.”

A graduate of Haverford College, de la Torre taught French and chaired the Foreign Language Department at Kent Denver School in Englewood, CO, before serving in the Peace Corps in Moldova. Subsequently she completed a master’s degree at the Harvard Graduate School of Education in International Educational Policy and a certificate in Non-Profit Management and Leadership at the Boston University Questrom School of Business.

“I credit my time at Haverford College as some of the most foundational years of my life,” reflected de la Torre. “It was there that I discovered teaching as my life’s work and it was there that I learned that honesty, collaboration, respect, and empathy were the key ingredients to supporting students in the classroom and beyond. Haverford was also my first introduction to Quakerism and to the kind of inclusive community that I want to always create in schools. In today’s complex world, the focus on academic excellence and ethical and spiritual growth at MFS is exactly the combination students need to thrive and contribute on a global scale.”

Fluent in French and Romanian and proficient in Spanish, de la Torre grew up in a truly international home. A first generation American born to a German mother and an Argentine father, she was raised in a family that in her words “valued cultural understanding, empathy, and human connection through commonality and difference.”

“I have had the incredible privilege of traveling all over the world,” said de la Torre. “Each time I encounter a new culture, I am humbled by how much I don’t know and inspired by the new way in which I see my own world. I am reminded that we, as people, can connect on some level with just about anyone. Whether or not we share a common language, culture, or custom, there is always something that brings us together as human beings.”

In her free time, de la Torre enjoys spending time with her family — husband Patrick and son Evan, who will enter the Beginnings at MFS Early Childhood Program in 2018. de la Torre and her family enjoy travel, cooking, and anything outdoors — hiking, cycling, and running to name a few.

Moorestown Friends Heads of School since 1920: