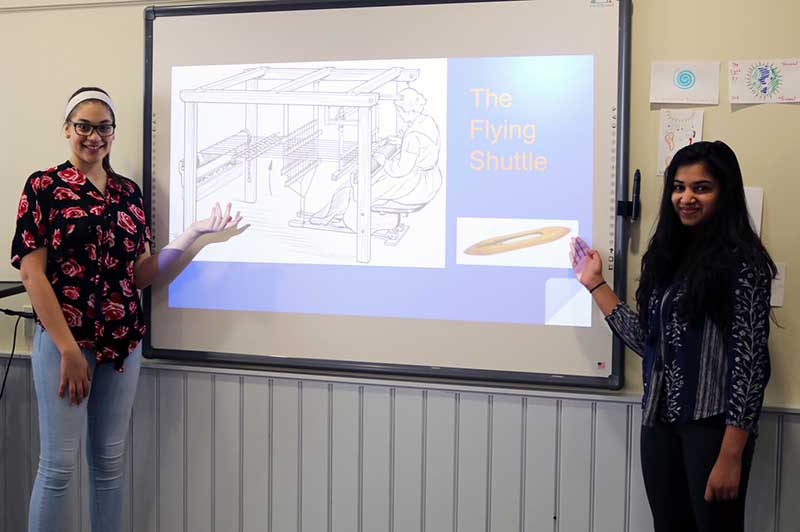 There may not be dramatic music playing as students enter the “Shark Tank” during Parker Curtis and Josh Weinstein’s 9th Grade 20th Century World History class, but the same witty pitches, scrutiny from investors, and groundbreaking inventions can be found in the Upper School classroom as on the actual TV show.

“We want to take Industrial Revolution era products and have students pitch them to sharks as if they were attempting to get financial backing,” said Mr.  Curtis.

ABC’s entrepreneurial Shark Tank is used as a model, and because students are so familiar with it they get excited and engaged, according to Mr. Curtis.

“[This project] is engaging in a way that is really good for the students…It also raises the stakes in a positive way. Students really have to know their stuff in a way that’s different than giving a traditional PowerPoint presentation,” he explained.

In the tank, students give their pitch to the sharks, who are teachers and staff from various school departments. The sharks participating this year were Jake Greenberg, a Middle and Upper School history and economics teacher, and Steve Kolaris, Director of Technology. During this year’s project, there was a focus on trying to match exchange rates to those from the 18th and 19th century, so investors and entrepreneurs would have a more historically accurate reference in their monetary offer. After their pitch, the sharks asked spontaneous questions to determine if they wanted to invest in the product. The student entrepreneurs have to know their facts to be able to answer and attempt to secure the deal with the shark.

“Students do a great job with this project and generally secure an investment from our sharks,” concluded Mr. Curtis.