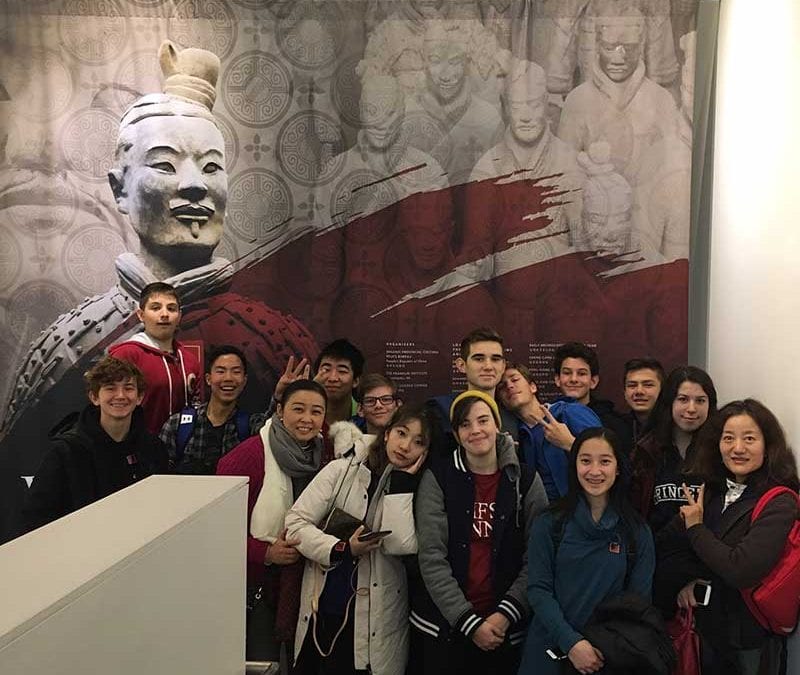 On Wednesday, December 13, the Level 3 Chinese class at MFS took a field trip to Philadelphia to study Chinese history and culture first hand. Their first stop was the Franklin Institute, where students observed artifacts and statues from one of China’s greatest wonders, the Terracotta Warriors. In preparation for the trip, the Level 3 Chinese class studied the Terracotta Warriors to review the history of ancient China and the effect that Ancient China had on modern Chinese culture, including the progressions of the Chinese written language. At the museum, the entire class was able to see authentic ancient scripts and currency and were given the task of decrypting the ancient language using the skills they had learned in class. “Learning about Chinese history [in class] was interesting, but going out and actually seeing the ancient paintings and scrolls helped me understand Chinese culture in a whole new light,” said Jackson Fox ’20.

After a few hours of walking around the exhibit, the Level 3 Chinese class took a lunch break at a traditional restaurant in the heart of Chinatown, Philadelphia for some Chinese cuisine. Here, students were able to test their knowledge of Chinese table manners and even ask questions about cultural differences they did not understand. One example occurred in the beginning of the multi-course meal when a student asked the waiter why Chinese tea cups do not have handles to hold hot tea in order to avoid burning your hands. The waiter responded, “If it’s too hot to hold, then it’s too hot to drink.” After some warm green tea and plenty of practice using chopsticks correctly, the class was delighted to chow down on some ramen noodles, fried vegetables, traditional Chinese soups, general tso’s chicken, and other Chinese dishes that they had only learned how to say, but never actually tasted. “Lunch was definitely the best part,” said Cassi Kennedy ’20. Many students were amazed by the variety of dishes at the restaurant including Alex Boller ’20 who had been to China a few times with family but said, “Even I haven’t tried some of these traditional dishes before.” Before their lunch break was over, students even visited a local Chinese bakery across the street where they tried some of the sweeter parts of traditional Chinese cuisine. Upon recommendation, they tried stuffed buns and bubble tea.

With only a few hours left to spare, the Level 3 Chinese class took a bus to the Philadelphia Art museum. Here, the class was immersed in Chinese history once again, observing the intricate paintings and sculptures of ancient China. Each student was then assigned to find a partner and together find a specific piece of Chinese art that they would research and give a presentation on in front of the class. The partnered classmates chose anywhere from glass orbs to painted stone to give their presentations on. “It was like a research project, but I actually got to see what I was researching,” said Zack Fox ’20.

Finally, the Level 3 Chinese class took the bus back to school, bringing with them loads of historical knowledge and cultural understanding about the country of China.