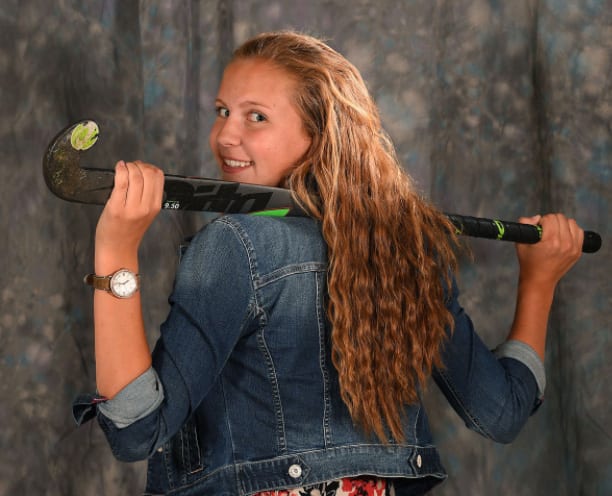 If real life were a movie, directors would have a hard time deciding whether to cast Elizabeth “Libby” Mayer as the “athlete” or the “academic.”

The Moorestown Friends School junior from Riverton is a standout in both categories. Libby is one of the top-ranked students in her class, maintaining a high GPA while taking several honors and Advanced Placement classes. Since her first semester, Libby has been a mainstay on the honor roll.

She is also a star athlete and plays a big part on the varsity field hockey and lacrosse teams. She played basketball as a freshman and sophomore, and recently joined the swim team, where she was named most improved player. In addition to her athletic and academic feats, Libby excels in another category — leadership.

While she might leave movie producers befuddled, in real life Libby cherishes her role as a student athlete. Earlier this year, she was honored by the National Field Hockey Coaches Association High School Academic Squad as a Scholar of Distinction.

“It seems like there is a divide between academic excellence and athletic achievement,” she wrote in her Teen Excellence essay. “In movies, when is the star of the varsity team also one of the best of her class academically? Almost never.”

“The field hockey team has shaped my high school experience,” Libby said. “All these traits translate directly to my everyday life.”

Libby’s leadership skills have been put to use off the field as well. She is in her second term as class president, is an officer in the Service Club and Cooking Club, and is an active participant in the Environmental Club and Agenda Committee.

Ashlynne Hunt Thomson, assistant director of college counseling at Moorestown Friends, described Libby as “enthusiastic, dedicated and well-respected by all” in her Teen Excellence nomination letter. “Libby is a person you want on your team — you will be better for knowing and working with her.”

Last book read: “Harry Potter and the Prisoner of Azkaban” by J.K. Rowling

Plans for next year: Senior year