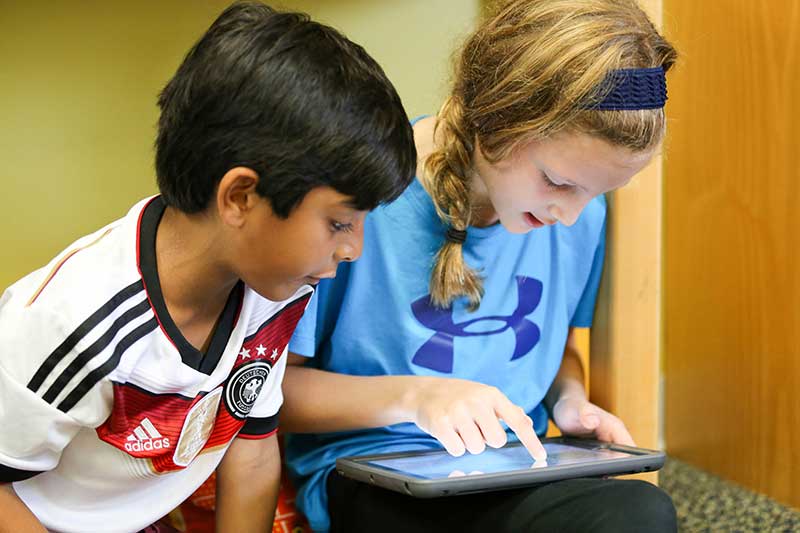 The Courier-Post featured an article recently that was picked up by the Associated Press and appeared in the Washington Times, Miami Herald, and more…

MOORESTOWN – Third-grader Matthew Will went to the front of the class and sat on the floor next to a robot named Beebot.

He pushed some buttons, sending codes to the bumblebee-shaped robot to carry out certain commands. His mission was to get Beebot to move two spaces forward in a taped maze on the carpeted floor, then three spaces to the left. The robot did just that.

It wasn’t just fun and games, though. It was a part of a first-year Lower School coding program at Moorestown Friends School for its younger students, which includes preschool up to fourth grades.

More than 220 students – some as young as 3-years-old – are in Liz Kahn’s coding classes.

“It’s been fun; I like the robots,” Matthew said.

Said classmate Gianna Berkowitz: “It’s really fun. We get to play a lot of cool games. Coding is a really fun way to learn. It’s like you get to code robots. I like robots. You can do a bunch of stuff with robots.”

The program evolved from a school-wide strategic planning process that identified possible additions and alterations to the curriculum in the areas of 21st century skills and Science, Technology, Engineering and Mathematics (STEM). Read more…