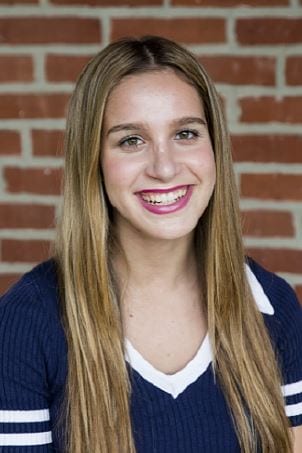 Each year, approximately 100 high school seniors gather on Princeton University’s campus for the Creative Arts and Humanities Symposium, a weekend of workshops and seminars covering a range of topics, interests, and artistic genres. MFS senior Mariana Goldlust was recently one of the students nominated for, and chosen as, a member of this highly selective group.

“The weekend offered me a glimpse into the college experience because I was able to meet seniors from all over the country who were both similar to and different from me,” Mariana says. “Despite our varying backgrounds, what brought us together was our collective enthusiasm for the arts, humanities, and learning as a whole.

Mariana’s favorite workshops from the weekend included “Do You Have a Headshot? Framing Identity in Actor (Self) Portraiture” and “Cinematic Skins: On the Filmic Matter of Our Bodies,” both taught by Princeton professors. She also enjoyed a dance workshop led by the head of the Princeton Dance Department.

“She encouraged us to represent ourselves authentically through choreography and performance,” Mariana says.

Mariana’s artistic experience includes performing in over 30 theatrical productions, serving as Co-President of the MFS Drama Club and Vice President of the MFS Dance Team, and founding a weekly volunteer program (“Dignity Qrew”) that provides music, art, and dance therapy for seniors with dementia at a local nursing home. She is also the president of the MFS Model UN elective and club.