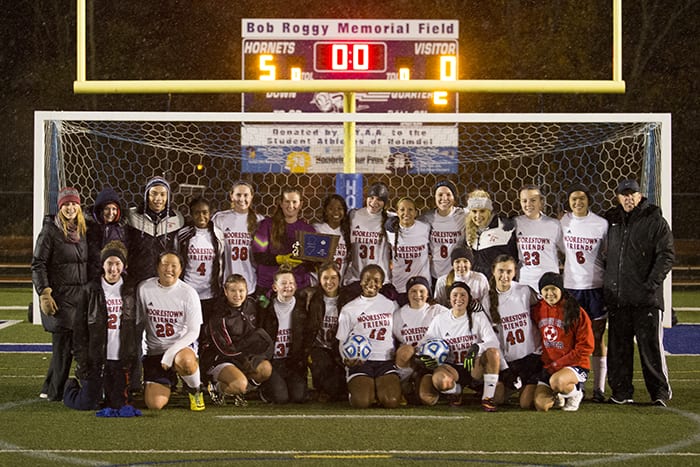 On a rainy and snowy evening at Holmdel High School, both teams started out cautiously with the match largely being contested in the midfield for the first 15 minutes. The first break came in the 16th minute when Vanessa Kara broke down the right wing and was taken down in the penalty box. She converted the penalty kick to put the top-seed Foxes into the lead.

The remainder of the first half was very evenly played with MFS keeper Gaelyn Gregory and GSB goalie Alyx Schrecengost making a number of big saves.

In the second half, the Foxes took control of the match. From the opening whistle, the ball remained almost entirely in the Gill half of the field. In the 51st minute, a beautiful individual effort by Kara, who beat four Gill defenders, put the Foxes up 2-0.

Minutes later, Kara volleyed a Sarah Henig corner kick into the far corner of the net to put the Foxes firmly in command — giving the Drexel-bound senior a championship hat trick.

With seven minutes remaining and snow now falling steadily, Alyssa Runyan took a Kieran Lees pass and slotted the ball into the right side of the net for the fourth goal of the evening.

Lees then put the icing on the championship cake with the Foxes fifth goal with 1:50 remaining the game.

Coach Keith Harman’s squad celebrated the first Girls’ Soccer sectional championship in the 21-year history of the program. MFS captured three consecutive Friends Schools League championships in 1995, 1996, and 1997. However, this is the program’s first-ever NJSIAA championship.