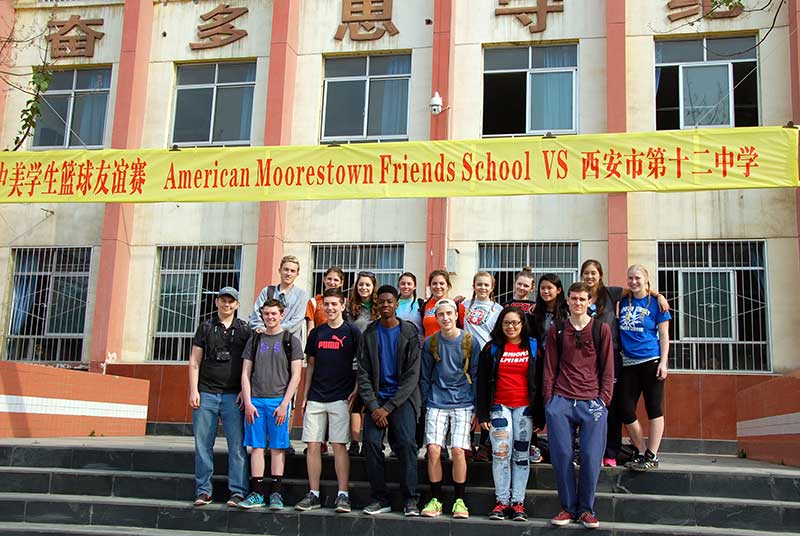 Seventeen students and three teachers journeyed to China from March 24 – April 3 for an Intensive Learning trip abroad to experience local culture and engage in service. The entire trip was filled with many memorable “once-in-a-lifetime” experiences, but a special highlight was the group’s visit to a middle school in Xi’an in central China. The MFS visit was featured on the Xi’an television news, and Chinese Teacher Cathy Wang and Spencer Dennis ’17 were interviewed.

The MFS caravan was formally welcomed by Xi’an #12 Middle School with remarks from the principal, banners and posters, a musical performance, and poetry readings. Afterwards, the MFS Upper School students participated in a number of cultural exchange activities, including answering questions in a cultural Q&A game show, competing in a friendly basketball game, and teaching three classes. The American lessons included learning the English alphabet, playing the game Simon Says, and dancing to the song “Cupid Shuffle.”

“Our students were so excited and happy to have such close contact with the local students, and the Chinese students loved meeting foreigners, too,” said Chinese Teacher Li Li. “After the basketball game especially, the Chinese students became less shy and asked our MFS kids many questions about their school and life in America.”

The MFS students were able to further practice their conversational language skills with local residents during their visit to the Drum Tower in Xi’an.

“When locals realized our kids could speak Mandarin so well, people would come over to chat and take pictures, which was so great for our students,” said Mrs. Wang. “One gentleman in particular at the Drum Tower interacted with each student and asked each of them their name, year in school, and where they came from. He was beaming, hearing how wonderful our students’ pronunciation skills are.”

Also in Xi’an, the MFS caravan enjoyed a bike tour around the city’s ancient walls, learned about the history of the Terracotta Warriors, and hiked up Mountain Hua, one of China’s five holy mountains.

During the beginning of their trip, in Beijing, the students and teachers explored the Forbidden City, Tiananmen Square, and climbed one of the wonders of the world, the Great Wall of China. Additionally, the group received some lessons on Tai Qi, or Chinese martial arts, and noodle-making.

The MFS group also spent a day just outside of Beijing serving the children of the Bethel Foundation, China’s only school for orphaned children with visual impairment. The students and teachers were tasked with helping to provide a safer environment for the children by cleaning the toys and the playground, as well as clearing trees in the yard.

“The trip had an impact on our students,” said Mrs. Wang. “All of our kids realized how blessed they are in their lives, and the experience helped them have a new respect for the Chinese language and culture.”