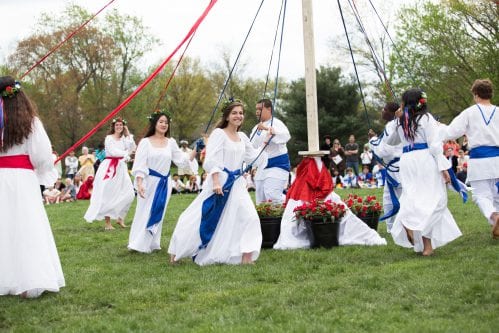 MFS will celebrate one of its oldest and most festive traditions, May Day, on Friday, May 4, from 12:15 – 2:45 p.m. The event, which dates back to 1912, will include the festive Maypole Dance along with performances, music, activities, crafts, and roving costumed characters. Every four years, MFS hosts this Elizabethan celebration of spring that includes all students, from preschool through 12th grade, parents, and alumni. May Day coincides with the school’s Alumni Weekend celebration which takes place May 4-5.

May Day festivities kick off with a parade of classes departing from in front of the Lower School. All students, faculty, and staff will be dressed in May Day costumes. Opening ceremonies follow at the “May Day Amphitheater,” located on the athletic fields. The May King, Queen, and Regent will be crowned at this time. Following the opening ceremonies, a wide range of activities will be offered, including musical and theatrical performances, human chess, storytelling, character presentations, a trebuchet launch and much more. Festivities culminate with the Maypole Dance performed by members of the Class of 2018.

Highlighted activities during the afternoon include:

In conjunction with the May Day Celebration of Community, the school will also conduct a food drive to benefit the Food Bank of South Jersey which distributes 12 million pounds of food a year to nearly 200,000 individuals through its network of over 200 emergency feeding programs.  Donations to the Food Bank are made available to programs located throughout Burlington, Camden, Gloucester, and Salem counties.

May Day is based on an ancient Roman festival that lasted from late April to early May, in which Romans offered flowers to Flora, their goddess of spring. The Romans brought that custom to all European lands they conquered, making May Day a worldwide event.

By the Middle Ages, it became especially popular in England, where people rose early in the morning to “bring in the May.” They gathered flowers and tree branches to decorate their homes and later went to the town square where the Maypole — often over 100 feet tall — was raised. As a woman representing the May Queen presided over the ceremony, dancers held the streamers that fell from the top of the pole and circled around it, weaving the streamers into tight patterns. These agricultural festivals were intended to ensure the fertility of the crops.

At MFS, May Day has been observed since 1912. Beginning in the 1950s, it changed from an annual event to a rotating celebration, sometimes once every two years and, more recently, every four years. It has traditionally been modeled after a May Day of the Elizabethan Period in England.

The King, Queen, and Regent are randomly selected from those who express interest in the roles. The ceremonial court presides over the May Day events. Preschoolers costumed in petals and ivy will present flowers to the court, another long-standing tradition in which the school’s youngest students honor those who are graduating.