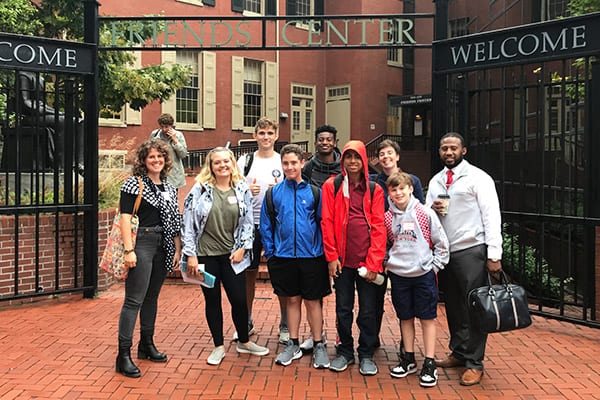 A group of Middle and Upper School students traveled to the Friends Center in Philadelphia on October 3 for a workshop about Quaker-based decision making. Attending were: Calvin Bell ’20, Cole Blackburn ’25, Bailey Butterworth ’20, Shelby Deibler ’20, Harrison Kutalek ’26, Charlie Tanas ’20, and Ted Tarter ’25. The day’s events brought together students from multiple schools in the Greater Philadelphia area for discussions and activities.

“The students built connections between other schools, learned about how other schools do community-based decision making, and built vocabulary,” explained Melissa McCourt, the Chester Reagan Chair for Religious/Quaker Studies. All participating schools have a decision-making council or committee in some form, so students enjoyed discussing the similarities and differences in how they resolve conflicts and make important decisions.

Students also discussed the importance of collaborative and consensus-oriented language. Examples include, according to McCourt, “‘I’d like to build upon what this person said…” or ‘I’m going to test my sense of the meeting.’”

The workshops are scheduled to continue throughout the year, allowing different schools and groups to pair up and work together.