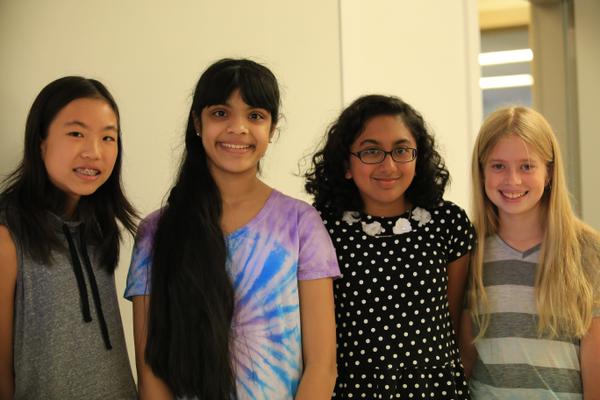 On August 25, the Middle School Robotics Lunch Club hosted a launch party in Hartman Hall to accept its first mission of the year from the FIRST LEGO League (FLL). The FIRST LEGO League reveals a new Challenge each year that prompts students to explore real-world scientific topics. At the launch, five seventh grade students and their advisor US Math Teacher Brooke Smith learned that the 2015 FLL Challenge was called Trash Trek, a project that requires students to design innovative solutions to make less trash or improve the way people dispose of trash.

Together, the students viewed videos explaining the Trash Trek Project, the Robot Game, and the FLL Core Values. For the project, the Robotics Lunch Club will research the current methods of trash collection, disposal, and recycling; understand why established systems may not be working as imagined; build upon their foundational knowledge and strategically design their team’s unique way to solve the identified problem; then present their solution at a Robotics tournament.  The seventh graders will also engage in hands-on learning by using LEGOs to assemble robot models of items commonly found in the trash world, like landfill bins, factories, and collection trucks.

The Club will compete until March, participating in scrimmages and formal competitions. Additionally, Moorestown Friends will host a competition at the school later this year.