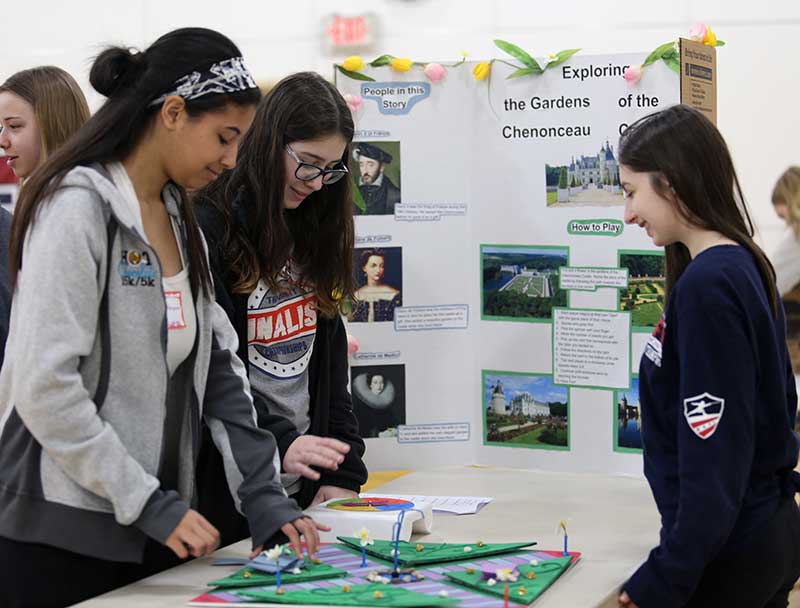 The action-packed day began with an Afro-Haitian dance performance by the CUMBE African Diaspora Dance Troupe based out of Brooklyn, NY. “By design, our Moorestown Friends French Fun Day was meant to showcase the diversity of French culture in the world, not just featuring the stereotypical culture of France, by exploring the culture of other French speaking countries like Morocco, Senegal, Martinique, Niger, Belgium, Madagascar, Haiti, Switzerland, etc.,” said Mr. Kelly. “Plus, through the diverse types of activities of French Fun Day, we hoped we could provide different ways for the students to connect their interests to the Francophone world and inspire them to want to learn more about the language and the people who speak it.”

In addition to a CUMBE dance lesson, the attendees of French Fun Day rotated through other workshops, such as impressionist painting, a Tour de France relay race, board games and video games about the castles of the Loire Valley, crepe and Moroccan tea tastings, a display of French comic books, sketching French fashion designs, an exploration of French Polynesia and Tahiti, and throwing a New Orleans inspired Mardis Gras parade.

“All workshops were proposed and facilitated by students, with the only requirement being that it needed to be interactive,” said Mrs. Murphy. “For example, many 9th grade students decided to make a board game or video game about the castle they were researching. This unit came about as the class was studying the difference between the two past tenses in French, and one of the past tenses is used to describe the way things used to be. Referencing castles was the perfect way to teach this particular grammatical structure and this cultural element simultaneously, and developing an interactive display as the final project was a great exhibit for our Moorestown Friends French Fun Day.”

For many students, designing an interactive final project, like a board game, was an unusual but fascinating approach to engaging in a French program that emphasizes learning about all the various threads connected to studying a language, like history, food, and culture. “What I like about French is that we focus on different aspects of French life or culture every quarter,” said Annabelle Crescenza ’21. “We don’t only study vocabulary but we read the children’s stories that kids in other countries read or another quarter we studied castles. I spent over a month researching the Château de Chenonceau, and I learned that the flowers of the castle’s gardens symbolized the drama between King Henry II, Queen Catherine de Medici, and Diane de Poitiers. So my board game tells you different facts about the castle’s history and its secrets.”

In advance of the Moorestown Friends French Fun Day, Aidan Short ’23 learned how to make crepes so he could manage the crepe-making station. “Food is always a big hit with middle schoolers, so I knew I wanted to offer crepes. It was so fun spending an hour and a half making crepes for everyone, I can’t wait to do it again for next year’s French Fun Day!”

Freshman Rebecca Benjamin decided to lead her own activity and created a “make your own Mardi Gras” workshop. “I made little kits so groups of students could become their own krewe and make their own parade floats, crowns, and necklaces. I also had king cupcakes! I liked that everything with our Moorestown Friends French Fun Day was student led and we had a chance to celebrate the French speaking world.”

Building connections was the most significant theme of the day. Not only did the Moorestown Friends French Fun Day unite the study of diverse French speaking cultures under the umbrella of a shared language, but it also joined together all French language students at MFS. Additionally, the event expanded its audience to be inclusive of the participating middle school students from area schools. “We hoped to build our French community with our Moorestown Friends French Fun Day by inviting other schools to join us on campus,” said Mrs. Murphy. “French programs can be small so it was important to us to come together and explore the fun and exciting aspects of the entire Francophone world.”