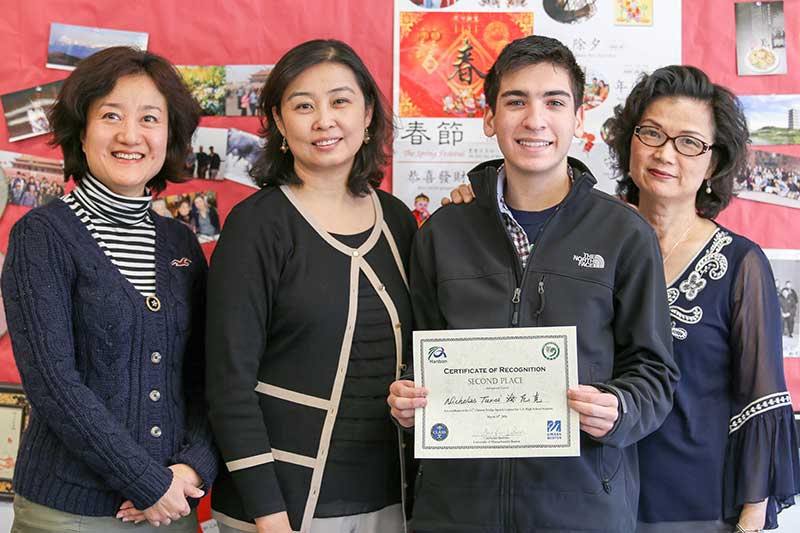 Junior Nick Tursi placed second in the 11th Chinese Bridge Speech Contest for U.S. High School Students at The Confucius Institute at the University of Massachusetts Boston on March 19. Nick competed in the advanced category, as he has studied Chinese for six years, and was only one of seven non-heritage students selected from a national pool to attend the contest as a finalist. MFS Chinese Teacher Li Li attended and supported Nick at the event in Boston.

To enter the contest, Nick composed and recorded a four-minute speech written and spoken in Mandarin in January. For the final competition, he presented his speech then answered a series of questions in Mandarin from the panel of judges.

“My speech was about the mixing of tradition and modernity in Chinese culture in 21st century society,” said Nick. “I’ve visited China twice – once during an MFS Intensive Learning trip in 2014 and again this past winter with my parents. We went to Shanghai and Beijing, and my speech was partially anecdotal from this past trip. Shanghai has so many modern buildings and wealth, it looks like New York. But when you go deeper, you find temples and gardens, where tradition is ingrained in the culture. Beijing is the exact opposite. It is a traditionally oriented city with modern features, like the Olympic Park. However, the Olympic Park was traditionally built with feng shui themes.”

Nick has studied Chinese since the sixth grade at MFS.

“I wanted to study something different and a language that I was not familiar with,” said Nick. “The culture itself and the way the culture is integrated into the language is really unique. Also, in our globalized world, whether it is through a business opportunity or science, Mandarin will likely enter different aspects of our lives. It’s a valuable language to learn as China becomes more influential as a global superpower.”

His three Chinese teachers at MFS (pictured with Nick), Ahnam Chu, Li Li, and Cathy Wang were all complimentary of Nick as a student.

“He is very self-motivated and he has such a strong interest to learn beyond the textbook,” said Ms. Wang. “He dedicates his own time and asks his teachers to explain more about the language, which is wonderful to see.”