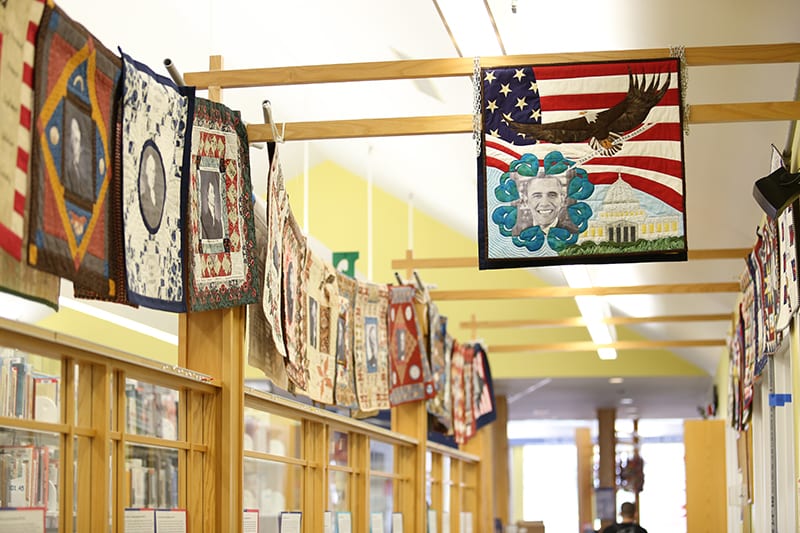 The MFS Library is showcasing a special exhibit of 43 historically accurate presidential quilts to add to the school festivities leading up to the 2016 Mock Primary Election on January 14. The exhibit, called the Presidential Quilt Project, will be on display until November 25.

The Presidential Quilt Project is touring the nation from September 2015 to December 2017 to commemorate the 2016 United States presidential election, and MFS is fortunate to be the only school that will host the exhibit. Latin Teacher Linda Vizi made the arrangements for the school display, as she was a contributor to the collection. She created the quilt square to depict the 29th President of the United States, Warren G. Harding.

“I am in the same quilting guild with Karen Dever, a Moorestown quilt historian, and she told me about the project,” said Vizi. “Quilters from around the nation had the opportunity to create a 24-inch square for one president, but we had some guidelines to follow. The quilts had to be reflective of the time period, so constructed with fabrics and quilting patterns that were popular in that presidential era. Additionally, the quilters included significant historical events of that presidency within the squares.”

Vizi chose to create a quilt for President Harding after she read a New York Times article about his presidency that piqued her interest. Before she began sewing and designing the square though, Vizi extensively researched Harding and the events of his presidential term, and she went far beyond the Internet to gather her information.

“I contacted his homestead in Ohio to ask them what they thought his most important contributions were,” said Vizi. “Harding was the first president after Abraham Lincoln to give a Civil Rights speech in Selma, AL, he introduced a system to care for veterans, and he strongly advocated for balancing the national budget. He was also the first president to go to Alaska.”

Next, she contacted the Ohio History Connection, a state historical society, to see a copy of the front page of The Marion Star, the newspaper that Harding was the editor of prior to running for president, from the day after his election.

“The Ohio History Connection sent me additional photos of Harding,” said Vizi. “He was the first president to have an official White House dog, Laddie Boy, and that photo is in the quilt!”

To study the end of his presidency, Vizi then reached out to the San Francisco hotel where Harding died for photos and local newspaper clippings to add to her research.

“The hotel in San Francisco had newspaper clippings from the San Francisco Chronicle on the day that he died at the hotel,” said Vizi. “They scanned the articles and sent them over to me. I also contacted the current newspaper editor of The Marion Star to see their headlines and photos of their former publisher.”

Vizi hopes students will appreciate the history of the presidential quilts as she does, to build their interest and anticipation for the Mock Primary Election.

“For the students, I think the quilts are an opportunity to take a look at the past presidents, their parties, what they did, and what the times were like back then,” said Vizi. “The students can see the accomplishments of each president and think about what the future holds for us before this next election.”

The Presidential Quilt Project was started by Sue Reich, a quilt historian based in Connecticut, She will be speaking at MFS about the collection and patriotic quilts on Monday, November 30 at 7 p.m. in the Dining Hall Commons. The presidential quilts will be moved from the library to the DHC to be viewed for the presentation. The event is open to the public, and all interested members of the MFS community are invited to attend.

Click here to view more photos of the quilts.