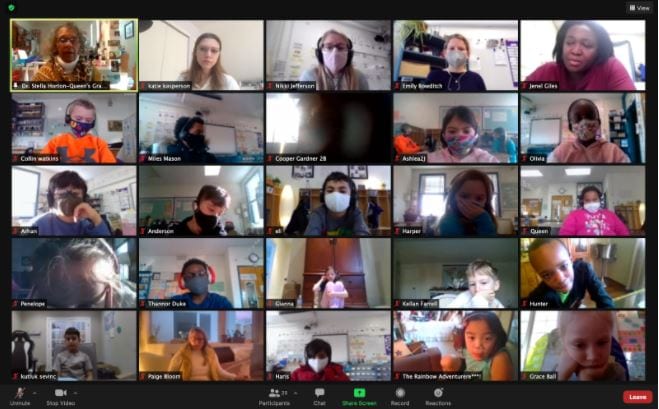 Dr. Stella Horton (also known as “Doc”), grandmother of Queen Knight ’31, visited both second grade classes on Wednesday, January 13  to talk about the Civil Rights Movement. Dr. Horton led peaceful protests of over 500 people when she was just 22 years old. She was a Black educator in a white school. She knew the four young men who led the Greensboro sit-ins. With second grade preparing for the special Meeting for Worship honoring Martin Luther King, Jr., which will take place on Tuesday, January 19, Dr. Horton’s visit was perfectly timed.

Dr. Horton’s involvement in civil rights began with her grandmother, Minnie, who demanded her children be allowed to ride the bus to school. When Dr. Horton was a teenager, she worked at a restaurant where Black people were not allowed to use the front door. Even though she was an employee, she had to follow this same rule. One day, she quit. This sparked her involvement in the Civil Rights Movement.

Second grade students have been learning about the Civil Rights Movement through books and class discussions. They are familiar with terms like segregation and civil disobedience as well as key figures from the movement, including Rosa Parks, Bayard Rustin, and, of course, Martin Luther King. Familiar with his “Letter from Birmingham Jail” and his “I Have a Dream” speech, students were eager to ask questions and learn more. Thannor asked whether Dr. Horton had ever heard Martin Luther King speak live (“no”). Collin wondered how many speeches he wrote in total (“hundreds”). Hunter shared that his grandmother had once met Dr. King at a church service, to which Dr. Horton simply responded, “wow.”

Dr. Horton’s visit focused mainly on segregation in education. She disclosed that when she was a teacher, her white principal told her not to mention Martin Luther King in her classroom. The second grade students were surprised to hear this, as they’ve learned so much about Dr. King already. Dr. Horton talked about freedom of choice, Brown v. Board of Education, and the Little Rock Nine. She emphasized that while much is now known about the Civil Rights Movement, some voices continue to go unheard. She said that “history” is often more like “his story;” it belongs to someone else.

The visit ended with Dr. Horton reading a passage from one of MLK’s speeches, saying “I stand for peace. I stand for justice. I stand to help others. I stand as proof that no matter how hard the struggle, we must fight for what is right and work to change what is wrong.” This resonated with students, as these values align with the Quaker SPICES with which they’re familiar. Leading up to next week’s assembly, “students will continue to reflect on how they can create and stand up for justice in our community,” said Second Grade Teacher Emily Bowditch.