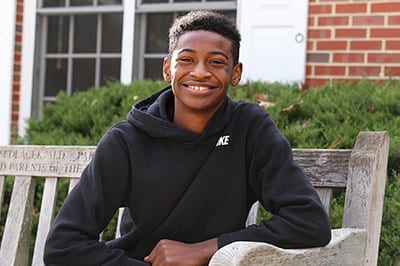 Calvin Bell III ’20 was one of 20 young innovators in the U.S. selected as a 2016 Entertainment Software Association (ESA) Leaders on the Fast Track (LOFT) Video Game Innovation Fellow for his design of a mobile application called “Waste-To-Move,” an environmental neighborhood watch app for urban areas. As a fellow, Calvin received a $1,000 grant to continue developing his project and he traveled to Washington D.C. on an all-expense paid trip. In the capital, he attended a White House briefing with the Department of Science and Technology, met with members of the House of Representatives at the Capitol Building, and presented his app to correspondents and computer and video game companies at the Entertainment Software Association offices. Sponsored by the Hispanic Heritage Foundation, the ESA LOFT Video Game Innovation Fellowship provides a platform for top minority game developers between the ages of 15-25 years old to focus on new technology-based approaches to address local and global social issues.

Calvin is greatly interested in politics and law and created “Waste-To-Move” in the hopes of bridging the void between government and the people.

“In urban areas, many companies are coming in and creating environmental hazards” said Calvin. “These problems can then lead to asthma, cancer, and other health risks. So my app combines telecommunications, technology, politics, and science to allow people to have a first-hand conversation with their local government agency. Users can report problems by sending pictures, connecting with community members, and communicating with environmental agencies to fix local issues.”

“Trying to create this app and startup is providing me with experiences that I haven’t had before,” said Calvin. “Startups are hard to create but it’s about perseverance, modifying plans along the way, and thinking long-term.”

Calvin enrolled at MFS at the beginning of this school year and is an active member of the community. He is serving as the Vice President of the freshmen class, acting in the theater program, singing in the choir, participating in the MLK Jr. Club, and playing on the JV boys’ basketball team.

“The diversity within the community is the main reason why I chose to attend MFS,” said Calvin. “There’s so many opportunities to do clubs and engage at school. People have different voices and interests and they are heard here.”