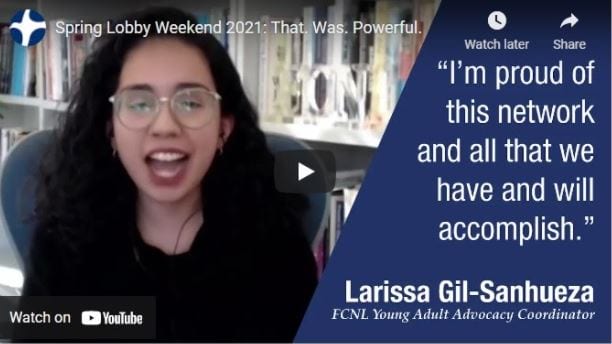 “Last weekend Upper School students participated in the Friends Committee on National Legislation (FCNL) Annual Spring Lobby Weekend. Hundreds of people met virtually to advocate for Senate passage of HR 1280, The George Floyd Justice in Policing Act. On Saturday, we met with some of our fellow delegates in a Coffee Chat. We then heard an address from Senator Cory Booker on the importance of advocacy and this bill. After this, we met with each other and our fellow New Jerseyans who participated in the event to prepare our lobby visits to the office of Senator Bob Menendez. The MFS group also planned a visit to the office of Representative Andy Kim. We attended several “deeper dive” workshops that helped us learn about Congress, the White House, and other aspects of Washington D.C. life. For example, I attended a workshop called “How to Climb Capitol Hill: Young Adults Working in Congress.” On Sunday, we started the day with a Quaker Meeting for Worship. We had another Coffee Chat and heard a message from Representative Karen Bass on the importance of advocacy from people of all ages. We also attended more deep dive and advocacy skills workshops. Finally, many of us attended “Birds of a Feather” groups, which were similar to affinity groups here at MFS. The MFS delegation lobbied with Amy Pfeiffer, who is Rep. Kim’s Chief of Staff. We had a great discussion about what aspects of HR 1280 are important to Rep. Kim, and how his personal view on the bill relate to his national security background and his experiences with anti-Asian American discrimination. Along with our fellow New Jerseyans, we met with John Butchko and Shelby Boxenbaum of Sen. Menendez’s office. They talked about the Senator’s firm commitment to the bill and his desire to talk with his Republican colleagues to get it passed. Overall, I found this weekend to be an interesting and insightful experience. I learned a lot about politics and lobbying. I hope I can take these lessons as I continue my MFS journey.”