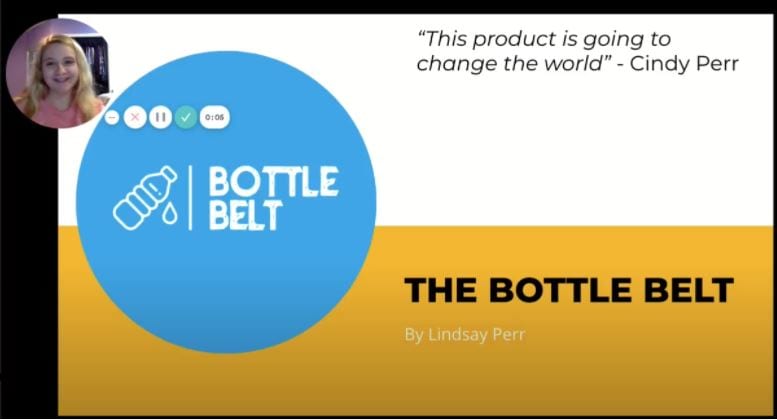 Upper School student teams and individuals came together to present a five-minute pitch to four alumni judges on April 30. The work was part of the first annual MFSBiz Entrepreneurship Pitch Competition. The goal for students was to develop an idea for a business, profit or not-for-profit. Students had the option to start a small business, large company, solo venture, or start-up. They developed their business ideas, identified the market(s) and consumers they aimed to target. The culmination was the five-minute pitch to convince judges to invest in their idea. The judges determined winners based on innovation, impact, implementation, metrics, presentation delivery, and pitch deck/presentation.

Each business idea reflected a passion as the students worked to present how they would bring their mission to market. “Collectively, the judges were so impressed by the thoughtful nature of the business ideas, the care for their fellow citizens, and the hard work they put into craft these business plans,” said History Teacher Jake Greenberg, whose Economics course students participated in the competition.

Three pitches stood out above all and earned prizes generously funded by the MFS Herman Hollerith Endowment:

First Place: Lindsay Perr ’21 (Bottle Belt) – An essential water bottle and phone accessory for people to stay organized on the go. $500 and entry into the Drexel Rising Starters Pitch Competition on May 10.

About the MFSBiz Guest Judges:

Ashley Edwards is the Founder and CEO of MindRight, a Newark-based tech startup that seeks to make mental health care radically accessible and inclusive. She was in the Black Founders inaugural cohort of the Google for Startups Accelerator. She has been recognized on the Forbes magazine “30 under 30” list and is the first Black female founder to raise $1 million in NJ. She holds an M.B.A. from the School of Business at Stanford University, where she was President of the Black Business Student Association, and also earned a master’s degree in education from Stanford’s Graduate School of Education. She attended Yale University for undergrad, where she was President of the Yale chapter of the NAACP.

Mike Carter is a successful entrepreneur, author, and investor. He is the CEO of BizEquity, a financial technology firm that was acquired by American City Business Journals. He is co-author of The Mission Corporation, a book that espouses a more ethical form of capitalism than is common today. (He also co-wrote, “What is Your Business Worth?“) He is the co-founder of the Entrepreneurs Management Group and was a founder/CEO of Dashboard Systems, and Ajunto. He served as a Managing Director for many years with The Musser Group. Fun fact, he was a judge on the television show Elevator Pitch for two seasons. Early in his career, he had roles with US Interactive, CTP/Novell, and Cambridge Tech Partners. He has master’s and bachelor’s degrees from the Haub School of Business at St. Joseph’s University.

Mark Friedenthal is described on his LinkedIn page as a “financial guru, math nerd, and entrepreneur.” He is the President of Friedenthal Financial, a fee-only SEC registered investment advisory firm in Marlton, NJ. He is also the founder and CEO of Tolerisk, a cloud-based tool for financial advisors. Before founding his own firm, he worked at Citigroup, GE Capital, Cendant, and the Federal Reserve. He is a graduate of Emory University. Mr. Friedenthal has hosted numerous MFS students in Senior Projects and summer internships and reached out to MFS grads regarding employment opportunities as well. He is an MFS parent.

Tony Yi is Senior Vice President for Corporate Strategy and Partnerships at Open Slate. He has been involved in the development and later successful acquisition of numerous companies in the media space, such as Videology (acquired by Singapore Telecom/Amobee), AddThis (acquired by Oracle), MyBuys (acquired by Magnetic), Digitaria Interactive (acquired by JWT-WPP), Narrowstep (acquired by KIY Digital) and Lombardi Software (acquired by IBM). In addition to his position at Open Slate, he is currently on the advisory boards of Ad Amp, Audience Platform, and Raising Dragons. He is a graduate of Johns Hopkins University where he double-majored in chemistry (his parents wanted him to be a doctor) and economics.