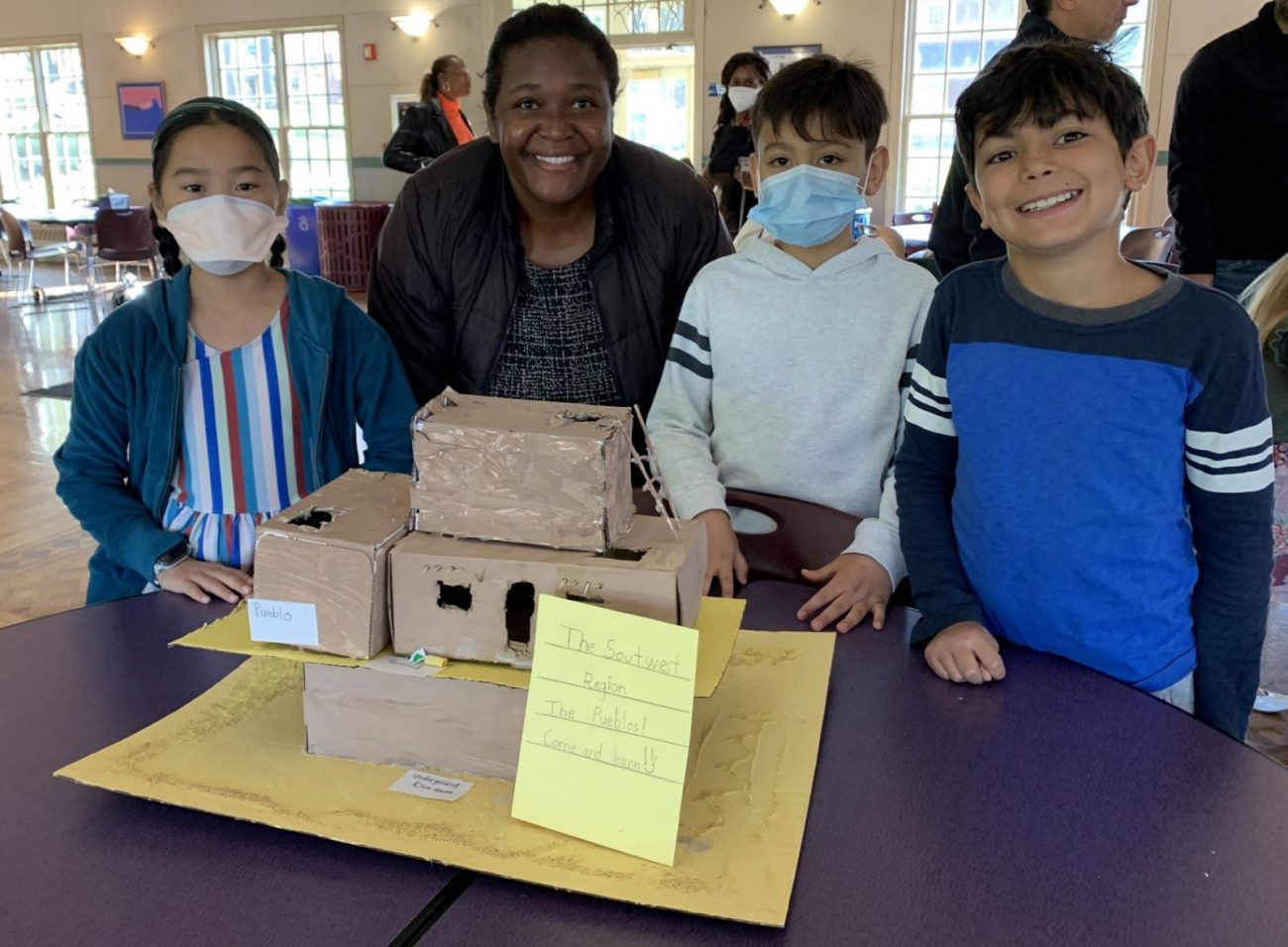 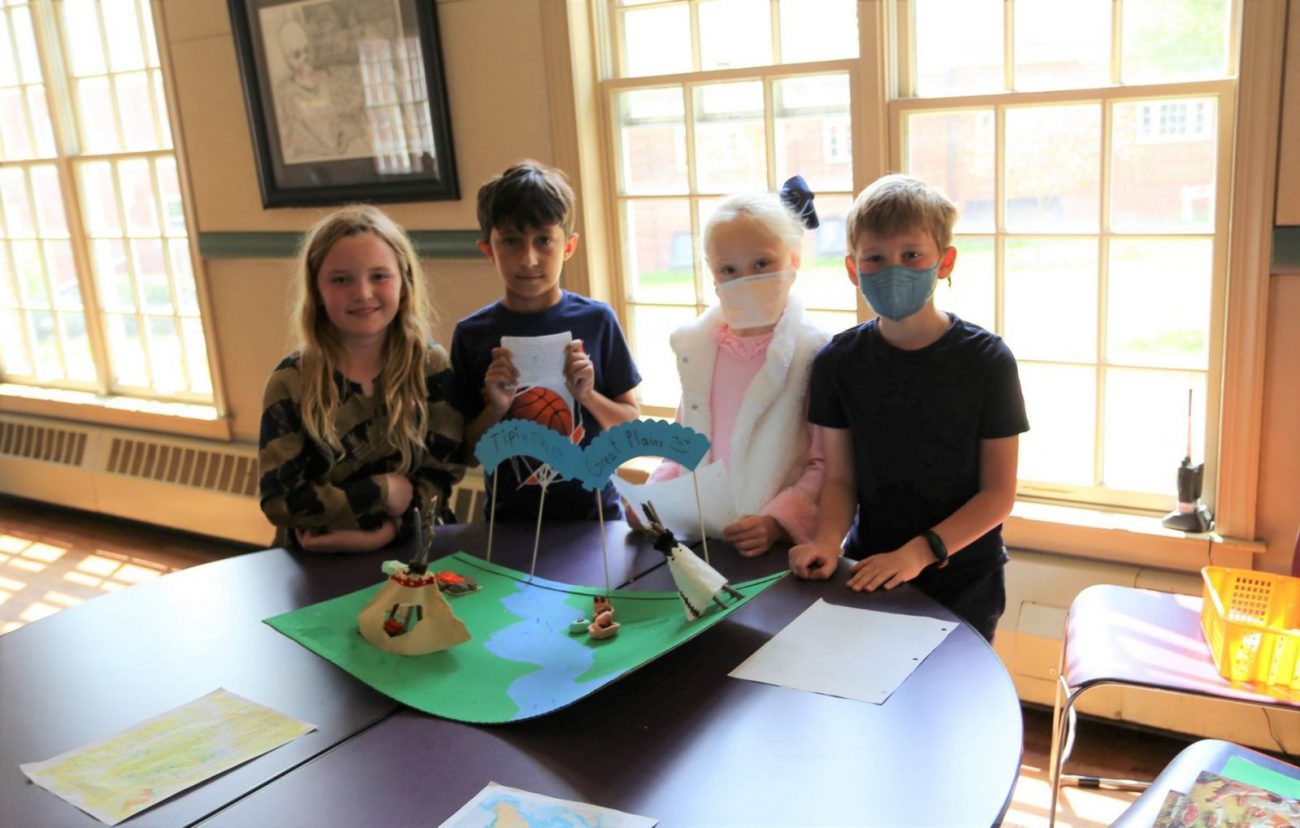 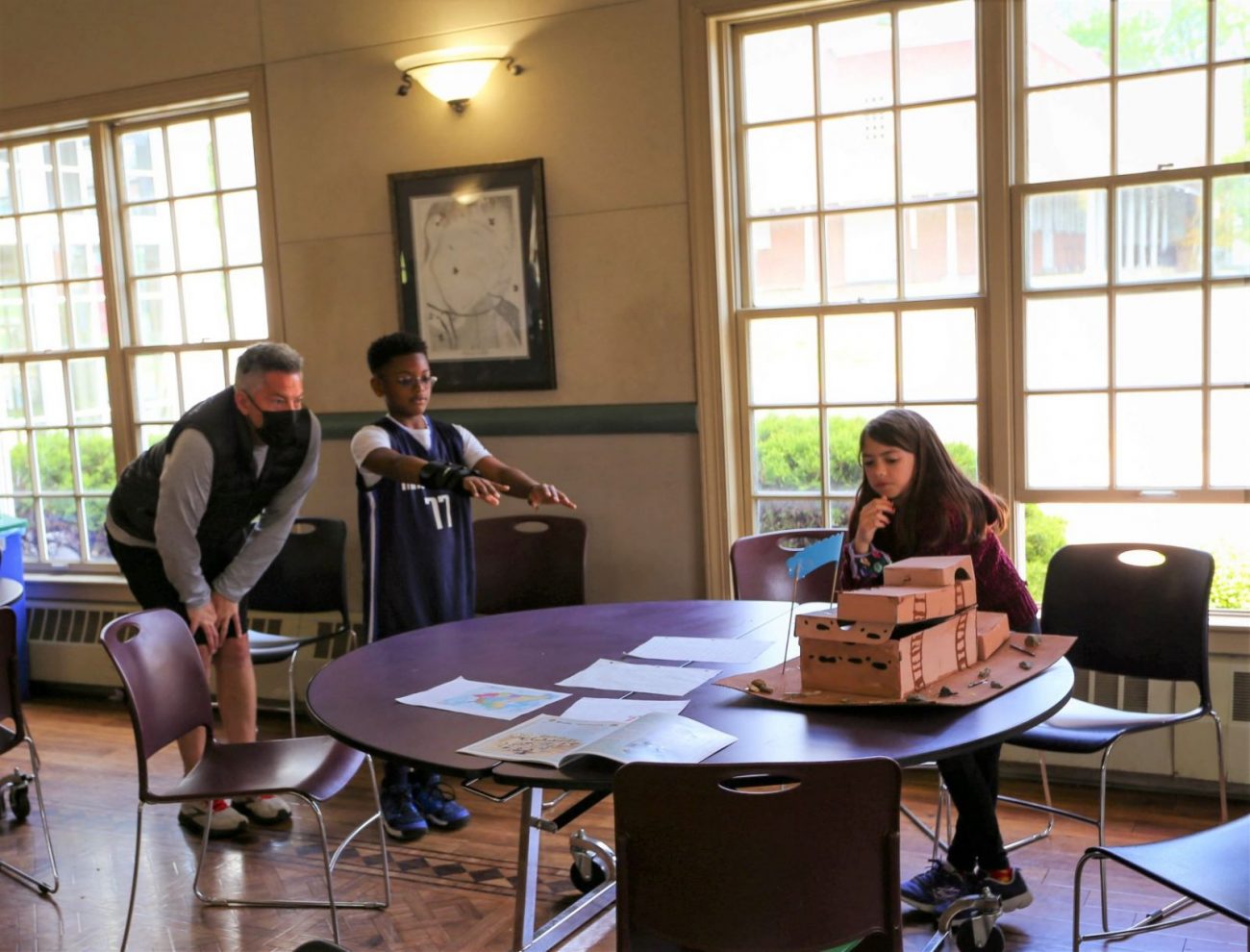 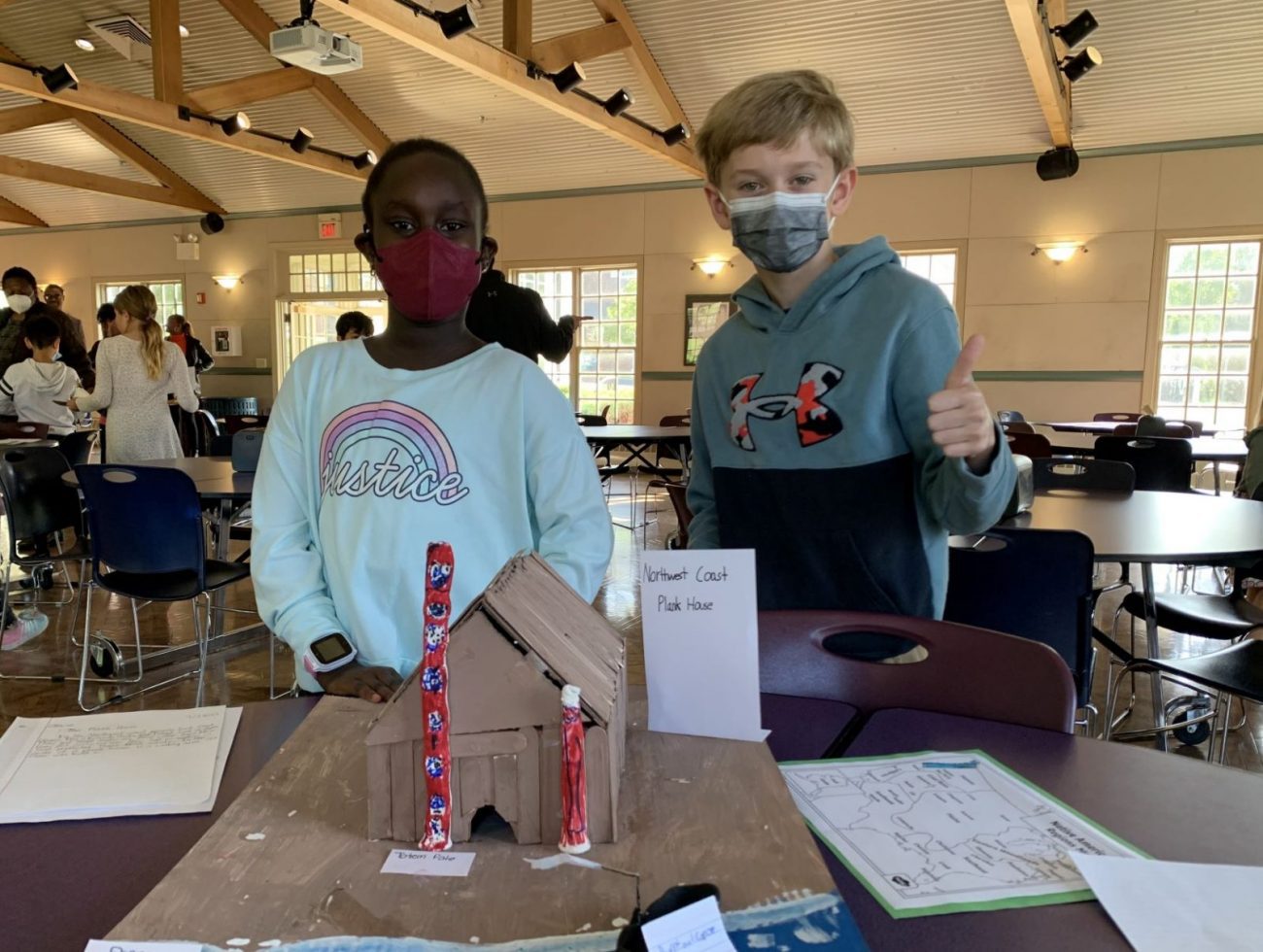 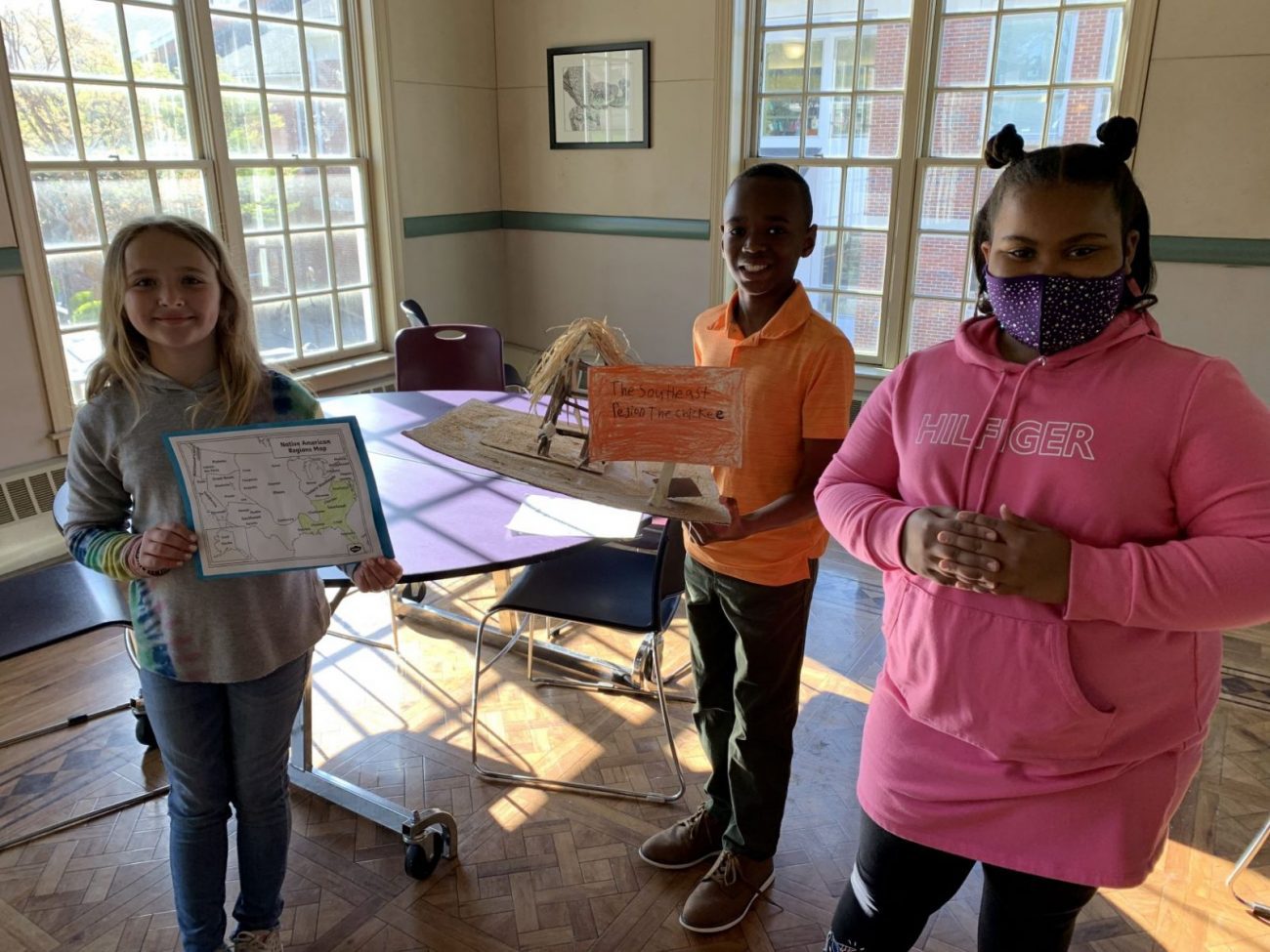 “This was the students’ first experience thinking about the requirements of a long-term research project and prioritizing, thinking about deadlines – all those skills they’ll need as they head into fourth grade,” said Third Grade Teacher Rachel Mainwaring

The unit began with an intensive study of the Lenape.

“We spent a lot of time talking about how the Lenape were here in our area first in pre-Colonial times and what resources and elements were present in their environment – dwellings, food, lifestyle, tools and weapons, and more,” said Third Grade Teacher Kenya Barber.

Students were also informed by two field trips – one in-person and one virtual.

Both third grade classes visited the Churchville Nature Center where they enjoyed a tour of the Lenape Village, connecting to their learning from the classroom, and drawing conclusions about life 500 years ago. Highlights were laying on the beds in the longhouse, trying to make fire, playing games, and a mock wedding ceremony.

The classes also made a virtual visit to the Smithsonian Museum of the American Indian during which two experts discussed issues facing Indigenous Peoples today. They described the land and some of the history and values of the Lenape and other tribes in the northeastern U.S.

As the unit progressed, students selected their topics and conducted their research. Librarian Ruth Malwitz assisted students in identifying resources and recording citations.

Group dynamics were important for the success of the small group.

“Working together and sharing responsibilities were important, and students realized they can’t do it all themselves,” said Mrs. Barber. “All of the group members had to contribute.”

There was also great time spent dispelling misconceptions and helping students to understand and analyze the reasons and current status of Indigenous Peoples in different regions of the country.

“Comparing and contrasting the past and today really helps them deepen their understanding and their analytical skills,” said Mrs. Mainwaring. “Kids this age make many assumptions that whatever is their identity is everyone’s identity. Being able to see others’ identities – see differences, value those differences. It helps them understand themselves even more.”