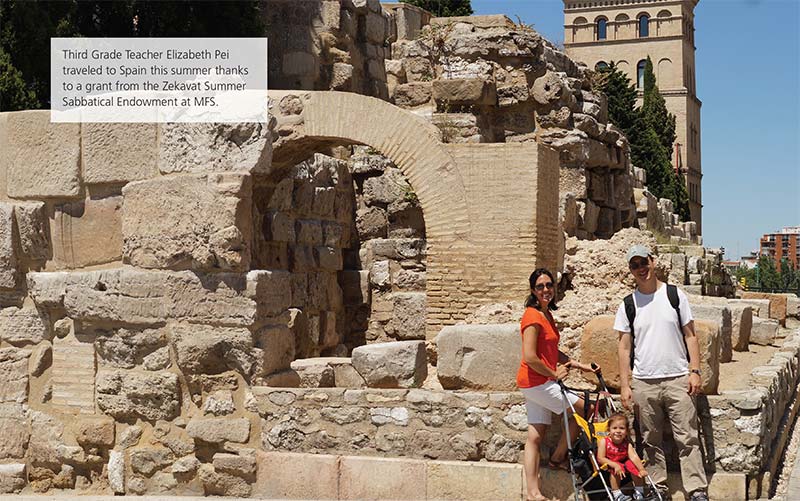 Third Grade Teacher Elizabeth Pei spent two weeks in northern Spain with her husband and young daughter, Nava, where she was able to conduct hands-on research for her positions as Third Grade Teacher and Lower School Diversity Coordinator. The trip was funded by the Zekavat Family Summer Sabbatical Endowment.

“Since I teach a unit about Native Americans, I wanted to learn more about how their cultures impacted life in Spain after 1492. Rather than continuing to perpetuate the idea of the indigenous people of the United States as victims, I decided to bring to light for my students a more balanced and holistic view of the changes that happened across the Atlantic Ocean,” said Pei. “For my role as a Diversity Coordinator, I also wanted to see how the people and systems of a country that has long been a crossroads support or hinder diversity.”

The Peis began in Barcelona, where they immersed themselves in Spanish culture. From there, they traveled north to the Costa Brava, a region along the Mediterranean coast of Spain.

“Many of the historical sites in that region reflect the complex past of Spain: Greek ruins topped by Roman ruins, for example, or Roman settlements taken over by the Visigoths,” said Pei. “We were awed by the level of respect in the Costa Brava for the different layers of history and the blending of cultures, many of which are still alive and thriving throughout the country. The people we encountered throughout our trip generally spoke two, three, or even four languages. I had the opportunity to brush up on my Spanish speaking skills and challenge myself.”

Next, the Peis visited Zaragoza, Logroño (capital of Rioja), and Pamplona. They experienced interesting culinary distinctions at each stop, reflecting some of the influences from the New World that Elizabeth was seeking to share with her students — many dishes included tomatoes, peppers, potatoes, and chocolate. Elizabeth also had the chance to admire the work of some of Spain’s greatest artists and architects, including Dali and Gaudí.

“The work of Spanish artists reminded me just how much the cultural exchange between the Old World and the New World continues to impact people both in the United States and in Spain,” said Pei.

Overall, the trip gave Pei a fresh perspective on a complex unit she has been teaching for nine years.

“I am more convinced now than I ever was of the importance of giving children the opportunity to experience towns, foods, languages, cultures, and worlds different from their own. While being outside one’s comfort zone can be trying, the potential for growth that comes with such experiences is unparalleled,” said Pei. “I believe there is much we can learn from the ways in which people in other countries interact with and treat those whom they consider to be different from themselves. Through exploring different regions of Spain, interacting with the people there, and doing research about the relationships between the different cultures of the region, I learned skills and strategies to bring back to MFS.”