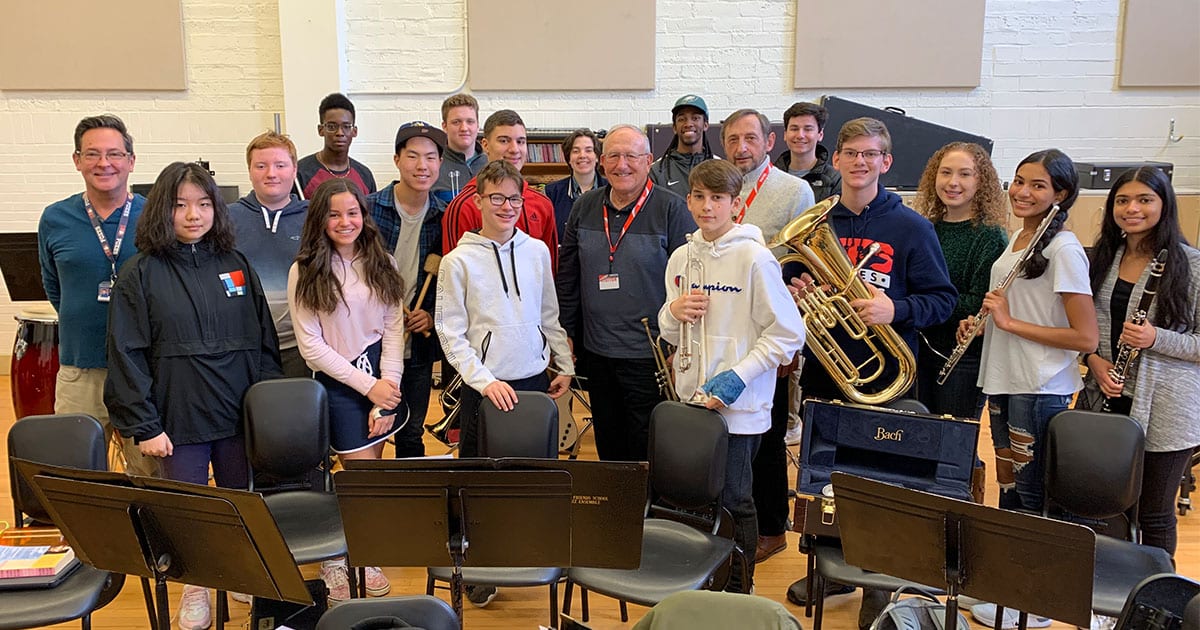 In addition, Mustapha Khan ’80 presented a special screening of his documentary Song for Our People, which is currently traveling the festival circuit and earning praise from audiences. The film, according to its official Facebook page, shows “eight musicians, five singers, a producer, rapper and tapper coming together to create a powerful new anthem to honor the perseverance of their African-American ancestors.”

Marco Lucchi earned his Artist’s Violin Diploma from Conservatorio Arrigo Boito in Parma, Italy. After coming to the United States, he earned his Master’s Degree in violin performance from the Esther Boyer College of Music at Temple University. While in Italy, Marco was a member of the Arcangelo Corelli Chamber Orchestra for many years. He is currently a member of the Riverside Symphonia and the Bay Atlantic Symphony; he has also performed with the Capital Philharmonic, Symphony in C, Delaware Symphony, and many other local groups.

He is currently the string director in the Lumberton Public Schools, and he was previously the string director at Moorestown Friends School, where he ran a Suzuki in the school’s program for 10 years. He is a registered Suzuki teacher and teaches privately in the Cherry Hill Area. Marco has studied with Hirono Oka, Lenuta Ciulei, Enzo Porta, and Grazia Serradimigni.

Dennis Walter received his B.M cum laude from the State University College at Fredonia, New York, where he studied with Theodore Frazeur and was awarded a Performer’s Certificate for “demonstrated excellence in the area of applied music.” While at Fredonia, he was a featured performer on the Percussion Ensemble recording “Percussion at Fredonia!” and a winner in the student concerto competition. Mr. Walter has completed post-graduate study at the New England Conservatory and Berklee School of Music in Boston as well as at Westminster Choir College in Princeton, New Jersey. He has also studied with Michael Bookspan of the Philadelphia Orchestra and Tony DiNicola of Trenton State College.

Mr. Walter performed for four years with the Air Force Band of the East stationed at McGuire Air Force Base where he was a featured marimba soloist, a set drummer for the Jazz Band, a vibraphone performer with the Jazz combo and a member of the Concert Band. He recently retired after serving 28 years as a Middle School music teacher at Northern Burlington County Regional School District located in Columbus, NJ.

Mr. Walter continues to perform locally and with the Serenader’s Big Band located in Wilmington, DE as well as in the pit orchestras for musical productions presented at Rider College and many local High Schools.

John Lindner is an adjunct professor at Montclair State University and a Senior Lecturer at The University of the Arts in Philadelphia. For 34 years Mr. Lindner served as the Director of Bands at Northern Burlington County Regional High School in Columbus, NJ. While tenured there he also served as Chairman of the Visual and Performing Arts Department. Mr. Lindner directed the Wind Ensemble, Symphonic Band, Brass Ensemble, Jazz Ensemble, Jazz Band, Marching Band and the Musical Show Orchestra.

Mr. Lindner’s performing ensembles received many awards and honors over the years. The Marching Band, under his direction, placed first three times at the USSBA Marching Band finals, with the group placing first in all seven of their competitions in the fall of 2001. The Jazz Ensemble in 2007 placed first in the NJ-IAJE State Jazz Band Division Three Finals and the Wind Ensemble was selected seven times to perform at the NBA/NJMEA New Jersey State Gala Band Concert.

Laura Camp (mezzo soprano) received her B.M. in Voice Performance from Wheaton Conservatory in 1999 and her M.M. in Voice Performance and Opera from Temple University in 2004. Since 2008, she has served as the Director of Worship and Arts at Bethel Church  in Cherry Hill, NJ. At Bethel, she oversees the weekly worship services, children’s choir, adult choir, orchestra, seasonal concerts and music events. As a soloist, Laura has had the privilege of performing roles ranging from Hansel in Hansel und Gretel to Consuela in the world premiere of Paul Epstein’s Chihuahua to a wide variety of oratorio works.

Laura served on Temple University’s adjunct voice faculty from 2012-2018 and continues to maintain a private voice studio from home. Laura is a passionate teacher and enjoys working with range of ages and musical genres.