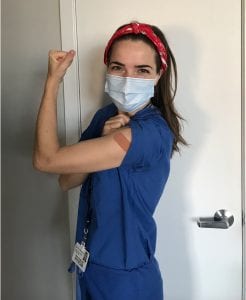 Before going to medical school, Monica Chelius spent two years as a research assistant at Memorial Sloan Kettering Cancer Center, a hospital that provides care to children, teens, and adults in New Jersey and New York. Now, she’s completing her residency at the University of Pennsylvania and training to be a radiation oncologist. Monica spends most of her time talking with patients about their cancer care, drawing on findings from past studies to make suggestions. She also works behind the scenes to plan the radiation treatments, from dosage to distribution. At the University of Pennsylvania, Monica frequently bumps into other MFS graduates.

She attributes her scientific enthusiasm to her former teachers Mr. Drew Newman and Dr. Barb Kreider. “I remember not liking science very much before I came to MFS,” said Monica. “That all changed when I met Dr. Kreider and Mr. Newman. They had so much enthusiasm for science, it was contagious. They involved us in extracurriculars such as the Science Olympiads, Envirothon, and Deborah Heart Challenge. These experiences were fun, mind opening, and attracted me to science.”

Monica earned her undergraduate degree at Duke University after graduating from MFS. She finished her medical degree at Dartmouth College.

“At MFS, I learned how to analyze issues, solve problems, and dig deep into the subjects that interested me. I learned the satisfaction of working cooperatively on team projects with my very talented classmates.”