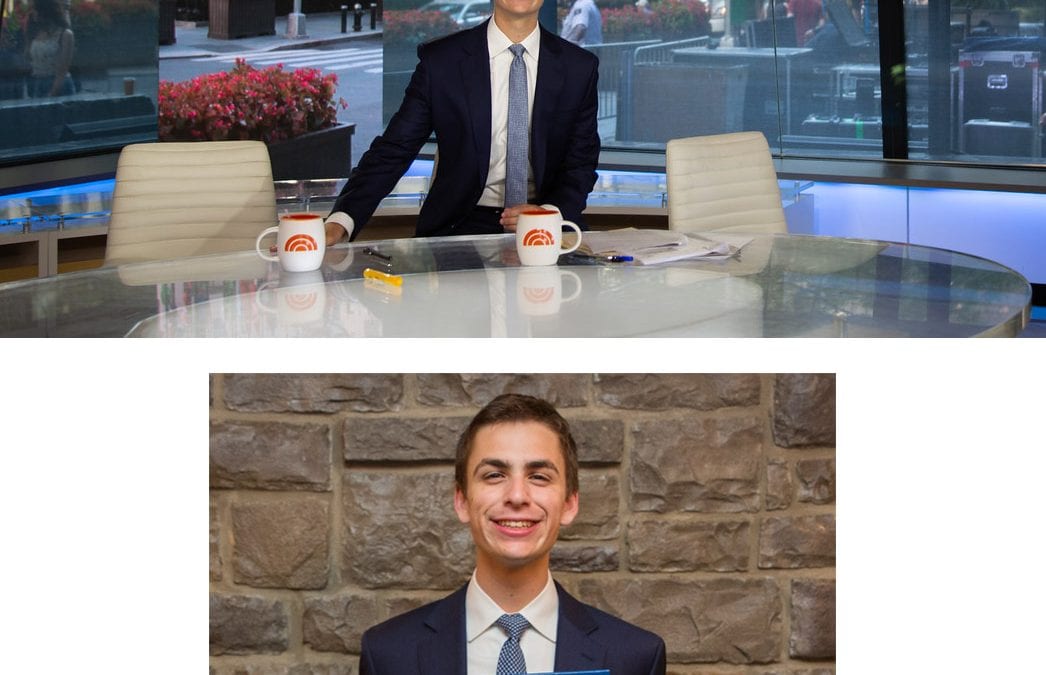 Enjoy these photos of Andrew, including many on some easily identifiable sets.

Andrew Rowan ’19 has been named the New Jersey High School Journalist of the Year by the Garden State Scholastic Press Association (GSSPA). He was honored at the New Jersey Press Association’s April 11 Spring Awards Celebration held in Hamilton. As the Journalist of the Year, Andrew is also the recipient of the Bernard Kilgore Memorial Scholarship ($5,000). Bernard Kilgore was the Managing Editor of the Wall Street Journal from 1941 to 1965 and head of the Dow Jones company. This annual scholarship recipient and award winner is selected by a panel of New Jersey newspaper editors. Andrew is now also entered into the competition for the National High School Journalist of the Year.

Andrew, a Cherry Hill resident, has been the consummate scholastic journalist at Moorestown Friends School. For two years, he has served as the Editor-in-Chief of WordsWorth, the student-run news organization which disseminates news on multiple platforms, including print, digital, video, and social media.

“Andrew has been unequivocally dedicated to reporting and sharing the news of our MFS community since the first day I met him,” said Diana Day, Academic Technology Coordinator, Portal Content Director, and WordsWorth Co-Advisor. “In addition to his boundless curiosity and his strengths as a journalist, another remarkable thing about Andrew is that he is a leader with a big heart. He encourages and guides the younger WordsWorth staffers so they have a chance to shine, too.”

After beginning as a staff writer his freshman year, Andrew served as WordsWorth’s Multimedia Editor and Executive Producer of its Fox Tracks news broadcast during his sophomore year. “Journalism has to adapt and pages with just text don’t resonate anymore,” said Andrew. “When you have images and interactive tools, people are willing to spend more time looking at your content.”

He has gained a great deal of experience working to develop video content thanks to the studio that opened during his freshman year. “The creation of the broadcast studio in Van Meter Hall gave us a great opportunity to experience news production,” said Andrew. “We learned about lighting, interviews, and many other technical aspects.”

Andrew is most proud of WordsWorth’s Spirit Center broadcasts, modeled after ESPN’s SportsCenter, which provide daily coverage of October Spirit Week activities. Launched during Andrew’s freshmen year, Spirit Center has become an impressive polished production. “There is nothing like putting together a broadcast immediately after something happens,” he said. “It was a big source of growth for me in the studio space.”

Commented English Department Chair and WordsWorth Co-Advisor Debra Galler: “In many ways, Andrew stopped being a ‘student journalist’ a long time ago – he is, simply, a journalist, and one of the highest caliber. His ethics, integrity, and diligence match any professional I’ve worked with. Andrew truly understands the important role of the press in our society, and I know he will use his journalistic skills to make a difference in the world.”

Andrew is the Editor-in-Chief of The Cupola, the school’s yearbook. In previous years, he served as Photo Editor. Andrew began on the yearbook staff in Middle School. “(Art Teacher) Mrs. Edmund saw I had interest in journalism and encouraged me to become the yearbook’s Middle School correspondent,” he said.

Andrew has also worked for four years in the MFS Marketing and Communications Department. He wrote a number of news stories and features, and also produced several video projects including an “MFS Defined” video series, a video for accepted students, and an aerial tour of the campus using drone video.

During his high school career, he has received an astounding 17 awards from the Garden State Scholastic Press Association, including six First Place awards. Andrew has also been inducted into the Quill and Scroll Society, the high school journalism honor society. This past summer Andrew attended the highly selective Northwestern-Medill Journalism Institute.

Outside of school, Andrew has served as the Social Media Manager & Graphic Designer for Rockhill restaurant in Cherry Hill. He is also the Marketing and Communications Producer for Congregation Beth El in Voorhees. Andrew founded his own production company in 2013 when he was in seventh grade.

How was his passion for journalism and media first stoked? Reflected Andrew: “It started with an interest in The Today Show in kindergarten. It was always on in my house and I was an early riser. I was fascinated by the host’s ability to ask guests questions and learn what people have to say. I eventually became interested in the technical side — learning video production, graphic design, things like that.”

Andrew plans to enroll at Northwestern’s Medill School of Journalism in the fall. He looks forward to joining the Daily Northwestern and the Northwestern News Network. He aspires to a career in broadcast journalism and still has a certain show in mind: “I haven’t decided if I want to be on the technical side or on the storytelling/reporting side,” he said. “I love to do both and today’s journalists need to do both. I don’t know… maybe I can end up somewhere on the Today Show? You never know.”