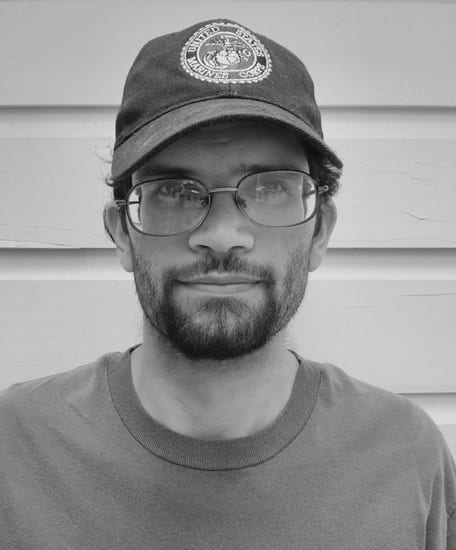 David Martinez ’00 has faced challenging obstacles throughout his life, both as a veteran of the United States Marine Corps and as an entrepreneur of his business Craftypodes. Nevertheless, his story demonstrates remarkable resilience, courage, and creativity in the face of adversity.

David greatly valued his time as a student at MFS, particularly his experience as a member of the Camden Scholars program, as he found it helped prepare him well for the hurdles he would face later in life.

“I can’t thank the [Camden Scholars] program enough for its entire existence. It allowed me to be in a completely different environment from what I was used to on a regular basis and interact with a lot of different kinds of people,” said David. “And it may not seem like a big deal, but the bus rides were very important for me. It was a long ride, about an hour, and it allowed me to talk with other people like me, talk about things going on in school and daily life, and make some long-lasting friendships.”

“I loved being in the Unofficial Official Monty Python Club with Doc (the late and beloved English teacher John LaVia). Doc was not only a tough, but fair, teacher, he was also hilarious,” shared David. “Also, Mr. Omilian really helped cultivate my love of mathematics and indirectly got me interested in computer programming, which I’ve dabbled in a bit since high school.”

After graduating from MFS, David decided to enlist with the U.S. Marines. He served for five years, specializing in radar for F-18 fighter jets and engaging in combat training, eventually rising to the rank of Lance Corporal. However, during his combat training, he badly injured his knees which led to various other related health issues.

“My physical issues were complications that I had to get around. I still had to keep doing my job anyway,” said David. “ As far as the military goes, you really never know what you’re going to get into until you’re already there. That may be a good thing or a bad thing, but you need to be able to compensate for that unknown and make it a good thing for yourself.”

At the end of his active service with the Marines, David moved to Texas with his wife Kelly to readjust to civilian life. Unfortunately, his physical disabilities worsened as his existing knee problems developed into back problems, and his condition and chronic pain prevented David from holding a job outside of his home. Additionally, within the last few years, David discovered he has Asperger’s syndrome.

“I really needed to be able to do something for myself, and one of the things that helped me to deal with the struggles in my life was crafting,” said David, who found stitching to be a relaxing and healing activity. “My wife got me into doing some knitting. She had been doing various crafts since she was a kid. Eventually, we realized we could do it professionally.”

After years of research and development, David and Kelly launched their own crafting business venture, Craftypodes, in 2012. They design cross-stitch/embroidery patterns, write crafting tutorials, and sell one-of-a-kind custom pieces. The couple reached a significant career milestone when they became recognized members of the Indie A-List community, one of the premier consumer resources for exceptional small businesses, in April 2014.

Though greatly appreciative of Craftypodes’ success thus far, David believes that the business and the art of crafting has benefitted him on an even deeper level by helping him regain some of his lost confidence. He is able to work from home as a creator, allowing him to look after his physical needs, while still pursuing his passions.