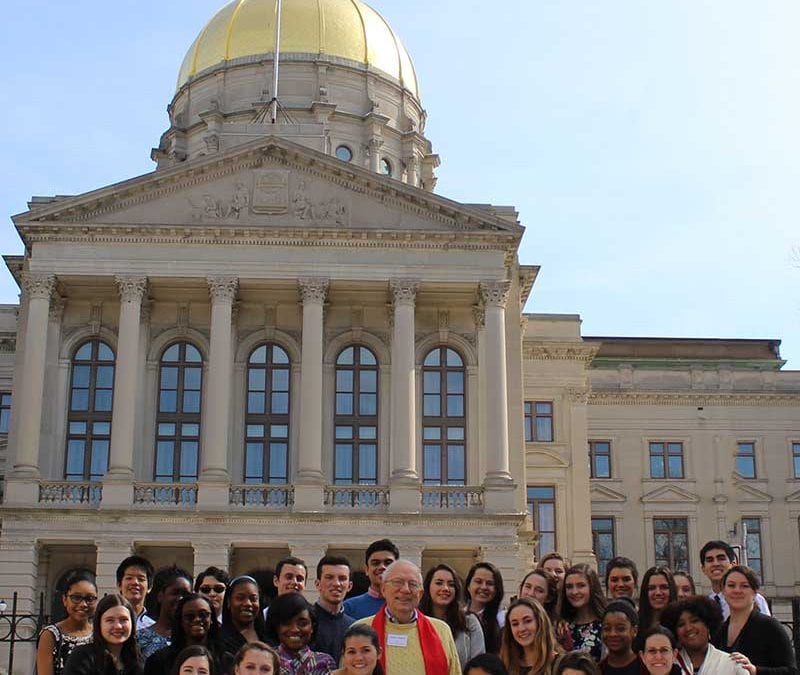 Pictured on the right is the MFS Choir with Martin Lehfeldt ’57 at the State Capitol in Georgia.

View two of the MFS Choir’s performances during a service at the Central Presbyterian Church in downtown Atlanta, GA:

From February 11-15, the MFS Choir, a representative group of both the MFS Singers and the MFS Treble Choir, traveled to Atlanta, GA on a five-day tour.  Choir Director Kelly Bixby led our group of 28 members. Our first stop was Monticello, Thomas Jefferson’s estate, in Charlottesville, VA for lunch and a tour. There, we met our guide, Steve, who would stay with us for our entire trip. Our next stop was Greensboro, NC, where we stayed at New Garden Friends School for the night.

The following day dawned crisp and cold as we headed to Guilford College, a Quaker college in Greensboro, for an Underground Railroad tour. Guilford College has a rich history of social activism, including advocating for the abolition of slavery. After a brief summary of Greensboro and Guilford College’s role in the slave trade, we ventured out into the woods to witness for ourselves the grounds where slaves would hide during the day, awaiting darkness in order to keep moving. An especially moving moment was when we gathered at the base of a huge tree, a tree so old it certainly could have been one of the places that hid the running slaves. Touching and seeing the places that had borne witness to these events was incredibly poignant.

Next, we boarded the bus and continued south to Athens, GA, where we had the opportunity to participate in a private master class with Professor J.D. Burnett at the University of Georgia’s Hugh Hodgson School of Music. We learned about enunciation and phrasing, and applied the new techniques to our concert repertoire. After the workshop, we completed our journey and finally arrived in Atlanta. We enjoyed a traditional southern-style meal at Mary Mac’s Tea Room, and checked into the hotel for the night.

The next day was a full day of sightseeing. After an early breakfast at the hotel, we boarded our bus and met with our guide for the day, Sharon. She grew up in Atlanta during the time of the Civil Rights Movement, so Sharon’s insight and historical background about all the landmarks we would visit was helpful. Sharon had witnessed Martin Luther King Jr.’s funeral procession, and she told us other stories about her childhood. We visited the Martin Luther King Jr. Historic District, stopping at Ebenezer Baptist Church, Dr. King’s birth home, and other landmarks. At the Ebenezer Baptist Church, we sat in pews and listened to a recording of Dr. King preaching in that exact church. After years of learning about Dr. King and seeing photos of his church and his home, visiting these landmarks in person humanized and solidified the leaders and events of the Civil Rights Movement for us. This experience turned these historical giants into real people with whom we could identify. The entire tour was deeply touching. We finished up the tour with a visit to Morehouse and Spelman Colleges.

After the tour, we stopped at The Varsity for lunch, and continued on to the World of Coca-Cola. We particularly enjoyed the extensive tasting room where there were hundreds of flavors of Coca-Cola soft drinks from all around the world (the Beverly from Italy was particularly…unique). We finished up the day of sightseeing with dinner at Hard Rock Cafe, which was memorable as we danced with other diners at the restaurant! After dinner and a brief rehearsal on the bus, we returned to the hotel for a night of swimming and choir bonding.

The following morning was the day of our performance, leading a service at the Central Presbyterian Church in downtown Atlanta. We sang a repertoire of four pieces including Oh, Jesus I Have Promised, a Christian hymnal, Lamp of Our Feet, a commissioned piece specifically for the MFS choirs, His Eye is on the Sparrow, a traditional gospel hymn, and Siyahamba, an African medley that portrays an image of peace and equality. We also met Martin Lehfeldt ’57, who helped us arrange our performance at his church (the photo is the MFS Choir with Mr. Lehfeldt at the State Capitol). After the service, we joined church members for lunch, and then boarded the bus again for the drive north to Winston-Salem, NC for the night. It was snowing when we arrived in North Carolina, but we had a pizza party to celebrate our last night on tour and a valentine-making activity to celebrate Valentine’s Day.

By the time we boarded the bus the next morning for the long drive home, snow had already covered the roads, making for a very slow ride. Our bus driver, Mario, did an amazing job driving in the inclement conditions. Although the trek home took 14 hours, it was a bus trip filled with games, Disney movies, and group bonding. By the end of the trip, people who had previously been strangers were talking and laughing like good friends. On this trip, we learned a lesson of peace and equality inside Dr. King’s own church, learned about the rich history of Atlanta’s African-American and Civil Rights history, and experienced a choir master class with a college professor.  The MFS choir tour was a priceless experience that brought the choristers together in a way that no other experience could. The bonding that happened on tour has endured in class and in the hallways, leading to a stronger choir community, and a stronger MFS community overall.