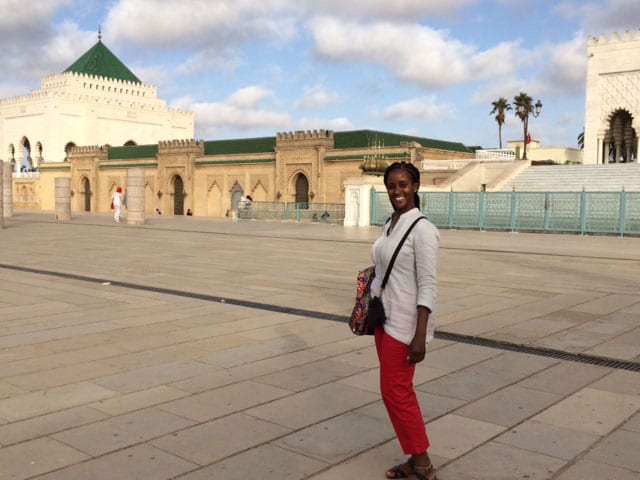 For just over two weeks in July, Kindergarten Teacher Kenya Barber traveled throughout Morocco to experience the culture of the country through the lens of an educator. Mrs. Barber was particularly focused on an exploration of the intersection of gender inequality, language, and education, as the literacy rate for Moroccan women (43%) is significantly lower than men (68%). As a member of the MFS Faculty/Staff Diversity Committee, Mrs. Barber was especially interested in looking at another culture’s values and educational systems. She appreciates both the work done at MFS around gender and ethnicity, and teaching at a school like MFS which has a student body with 40% students of color. Additionally, Mrs. Barber is a passionate dancer and she has studied the folkloric dances of Egypt and Morocco. She found she was able to discover more about politics and the oppression of women through dance than she could have learned through any history course. During her trip, Mrs. Barber participated in dance classes and attended a number of performances. She was one of two recipients of the 2017 Zekavat Summer Sabbatical, an endowment funded in 1996 by the Zekavat Family to encourage MFS faculty to engage in creative and challenging summer travel and study. The sabbatical seeks to contribute to the rejuvenation and education of faculty, to permit them to pursue personal growth and learning, and to offer them an opportunity to incorporate the ideas, experiences, and traditions of other cultures with students both inside and outside the classroom.

Mrs. Barber traveled to a total of six cities. The first five days of her stay were arranged through a formal program with the Bank Street School of Education, her graduate school alma mater, and she visited Rabat, Fez, and Marrakesh. In addition to tours of historical and cultural sites such as the Medina in Rabat, the Mausoleum of Mohammad V and Hassan, the Roman ruins of Chellah, and Andalusian Gardens, she was introduced to Moroccan education. She met with representatives from a variety of education institutions, had formal and informal visits to the Ministry of Education, and toured Moroccan schools with their teachers.

A unique opportunity that Mrs. Barber had was learning about the formalization of the Amazigh language at the Royal Institute of the Amazigh Culture. Amazigh is the language of the Berbers, who are indigenous to Northern Africa. It has been spoken since the beginning of time, but the language is only now in the process of being formalized with an alphabet.

“I was able to meet the man creating letters of the Amazigh alphabet, which is an important development for monolingual Moroccans,” said Mrs. Barber. “Citizens of Morocco must be fluent in more than one language in order to achieve some form of upward mobility, so I found it unsettling to know that people around the world are not given the same educational opportunities as others, such as people who are monolingual or women. By formalizing the Amazigh language, it will help it be regarded more officially, like standard Arabic, for the many Moroccan locals who speak it.”

Although Mrs. Barber had no previous background in Arabic, she enjoyed her introductory language lessons at the Mohammed V University.

The other destinations that she visited were Sefrou, Essaouira, and Casablanca for research around dance. Although she hoped to see more Moroccan folkloric dance, it is largely learned and performed at home. Instead, Mrs. Barber participated in more Egyptian dance classes.

Of course, the chance to learn more traditional dances gives Mrs. Barber the perfect reason to return to Morocco in the future.

“Although I had never been there before, Morocco was such a beautiful country that I can’t wait to go back sometime soon.”