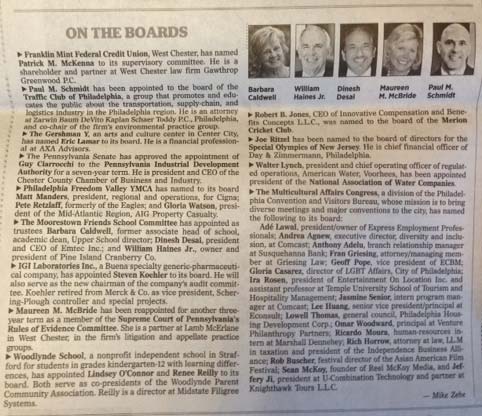 Barbara Caldwell is a former MFS Associate Head of School, Academic Dean, Upper School Director, and Chester Reagan Chair, who served 19 years at MFS before her retirement in 2012. She was the co-clerk of the 2011 Strategic Plan Committee and led the development of the school’s Twin Pillars of academic rigor and spiritual and ethical growth. From 2012 to 2014, Barbara served as clerk of the Strategic Plan Oversight Committee and managed the school’s Membership Renewal Process for its accreditation as a Quaker School. From 1982 through 1990, she served as the Director of Religious Education for Philadelphia Yearly Meeting. Barbara is active at Providence Friends Meeting, has authored articles on Quaker decision-making practice, and has served on local Quaker foundations. She earned a B.A. from Mount Holyoke College and an M.A. in Latin from Columbia University. Barbara and her husband, Sam, live in Media, PA.

Dinesh Desai has been Chairman of the Board, CEO, and President of Emtec, Inc. since 2005. In 1986, Dinesh founded DARR Global Holdings, Inc. and served as its Chairman and CEO from 1986 to 2005. He was President, CEO, Co-Chairman, and an owner of Western Sky Industries. Prior to 1986, he spent 12 years with American Can and Arco Chemical in various management positions, including marketing, manufacturing, finance, planning, and research and development. Dinesh is a former Member of the Board of Directors of the Enterprise Center. He is involved with various nonprofit and community organizations, and his family has established a school near his hometown in India to provide educational opportunities for impoverished children. Dinesh graduated from the Indian Institute of Technology in Bombay, and he holds an M.S. in Chemical and Industrial Engineering from Montana State University and an M.B.A. from Temple University. He and his wife, Sue, live in Moorestown, and they have two daughters at MFS: Sahaila (Grade 2) and Aaniella (Grade 4). Dinesh serves on the Camden Scholars Program Committee.

William “Bill” Haines, Jr. is Owner and President of Pine Island Cranberry Company, a fifth-generation, family-owned business that has been in operation for 123 years. Pine Island, part of the Ocean Spray Cooperative, is the largest cranberry grower in New Jersey. A former mayor of Washington Township, he became involved in the victorious gubernatorial election campaign of Christine Todd Whitman, and he served on Whitman’s economic advisory committee on the campaign as well as the Governor Elect’s transition team. In 1994, he was elected to the Burlington County Board of Freeholders, where he served for 15 years and was instrumental in the expansion of the county’s Farmland and Open Space Preservation programs. He is a founding partner of Cranberries Austral S.A., an international venture to develop a cranberry industry in Chile. Bill is a graduate of Rutgers University, Cook College, with a bachelor’s degree in agricultural economics. He has been a member of the MFS Head’s Council for several years and served as the 2010 Career Day Keynote Speaker. Bill is the father of William “Tug” Haines ’97 and grandfather of Leah Gimeno ’17. Bill and his wife, Nadine, live in Chatsworth.

These appointments were announced in The Philadelphia Inquirer and the Fall 2014 issue of Among Friends.