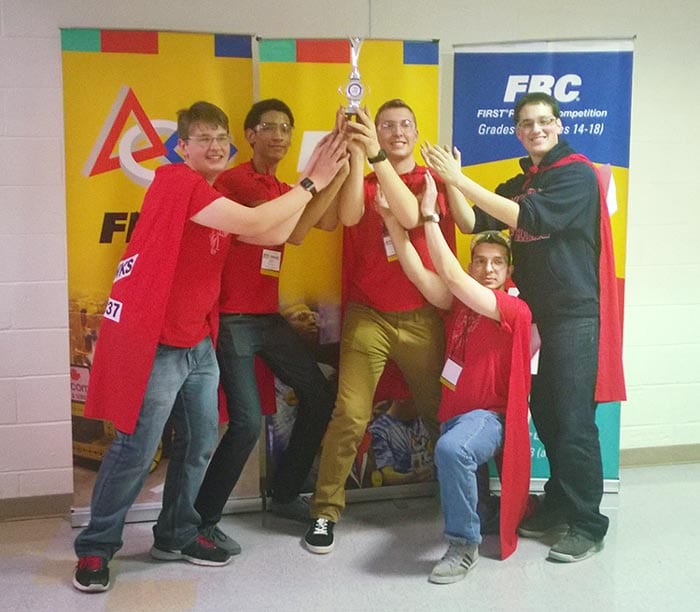 The MFS Robotics Team has qualified for both the New Jersey and the Pennsylvania state robotics tournaments.

On February 14, the MFS Hawks – represented by Scott Abrams ’15, Armon Adibi ’15, Ryan Baker ’16, Travis Benedict ’16, and Andrew Edzenga ’15 – earned several distinctions at the Lehigh Valley Qualifying Tournament. The Hawks won the Finalist Alliance Captains Award, were the captains of the second-place alliance, and were nominated for Think and Design Awards.

This year’s accomplishments continue a proud tradition in MFS Robotics. Over the past eight years, MFS teams have often qualified for state tournaments and have twice qualified for national competition. Physics Teacher Tim Clarke has led the Robotics teams throughout this time; he has served on the NJ FIRST® Tech Challenge committee for several years and was invited to bring his team to meet Dean Kamen (founder of FIRST®) at the Franklin Institute when Kamen accepted the Benjamin Franklin Medal for Science and Engineering in 2011.

“I attribute our history of excellence in Robotics to three factors: passionate students, dedicated coaches, and a supportive school community,” said Science & Engineering Department Chair Dr. Barb Kreider. “Students who excel at Robotics have more than technical acumen; they like team events, want to hone their communication skills, and are willing to help others. I admire our coaches, who give generously of their time and expertise before, during, and after school on many days of the school year and sometimes on the weekend, too.”

“Robotics is a tangible expression of our school’s commitment to keeping our students on the cutting edge of STEM; moreover, it is a vital component of the MFS science and engineering educational experience,” said Kreider.