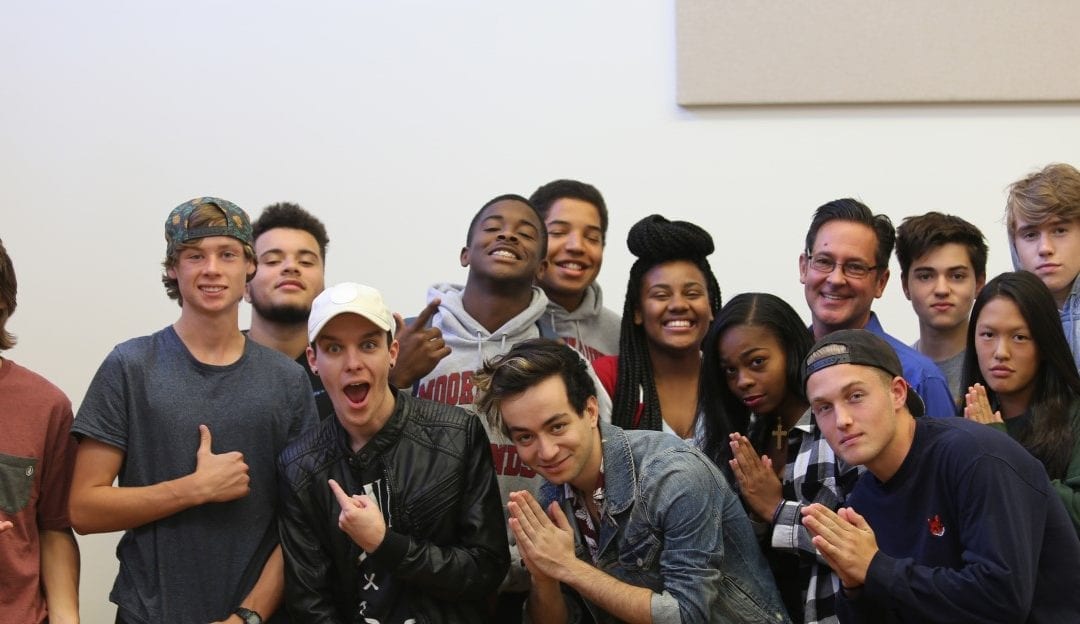 On October 6, pop recording artists Johnny Costa and Bruce Wiegner of the band The Weekend Riot (Twitter, Facebook, YouTube) visited Moorestown Friends School Arts Department Chair Brian Howard’s Songwriting class for a conversation about the music industry, the evolution of the band’s songwriting process, and their advice for aspiring musical artists. Both members of the band grew up locally in the Philadelphia area and are vocally trained by Mr. Howard’s wife, Martha Lavender.

Within the Songwriting class, Mr. Howard noted that the Upper School students often write songs independently and choose to produce their songs later. Reflecting upon their personal approach and style to songwriting, the band noted that they have found many benefits to collaborating with producers or other co-writers.

“When we first began working with new people, not just writing ourselves, we let the producers take the lead because they already wrote top chart hits and we didn’t know what we wanted to sound like,” said Bruce. “But at the end of the day, we primarily write for our own project and it’s our music, so we changed our approach to co-writes. Eventually, we finally were confident and comfortable enough to go into writing sessions and explain what our sound is and steer the direction of the session. Then we could be in a collaborative environment, bouncing ideas off each other, learning new things, and it’s a faster process than writing alone.”

No matter if students are writing alone or with others, the band repeatedly emphasized to the students to always record the entirety of their sessions.

“Keep the loose ends of songwriting,” said Johnny. “Songwriting is ongoing through life so record everything because we’ve had experience where we took bits and pieces of lyrics from years ago to use in new songs. You go through so many concepts and melodies, you will save yourself by recording everything. Don’t be afraid to put any idea down.”

One student asked about how a developing artist finds their sound or artistic identity, and the band encouraged the class to explore different musical influences to find what inspires them, rather than trying to prematurely define themselves as artists.

To answer another student question about how to break into the music industry, the band revealed what they considered to be the main key factors in pursuing music successfully as a career.

“For this era of the music industry, touring, social media, and brand deals are the biggest influences in getting exposure for your work and music,” said Johnny. “And, of course, be yourself and just share your music that you are passionate about.”