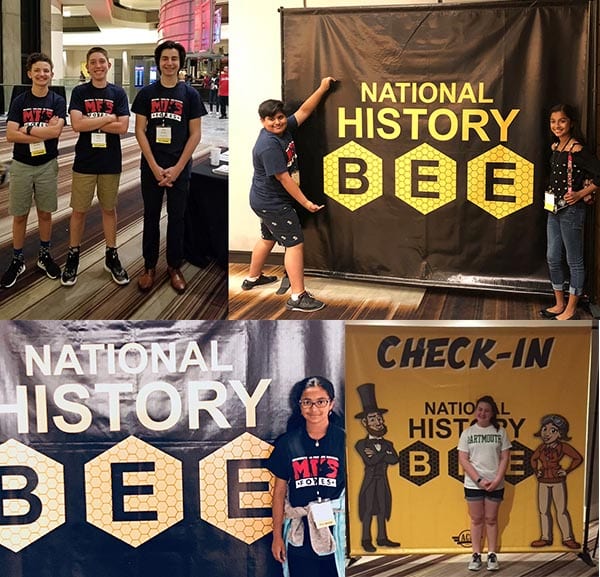 A strong contingent of eight students represented the MFS Middle School at the National History Bee Finals, which took place June 1-2 in Atlanta. A buzzer-based competition, the History Bee challenges middle schoolers with trivia questions about U.S. and non-U.S. history.

Ahead of traveling to Atlanta, the middle schoolers, including fellow National qualifiers Max Forstein ’23, Sreehita Hajeebu ’23, Aidan Short ’23, Sonia Singhal ’24, and Avani Verma ’24, studied together to prepare for the competition. These students all placed within the top 25% in their respective divisions at the Philadelphia (South) Regional Final, which was hosted on the MFS campus in April, to move on to the National Championship round.

“In participating in the bee I found the entire experience enjoyable,” said Aidan. “From competing against people to making new friends along the way it was a fun learning experience. I hope to compete again next year and make more friends.”

The students all enjoyed the experience of competing on behalf of the MFS Middle School at the National History Bee, and performed extremely well collectively for the Middle School’s first year of participation. As a result, a History Bee option has been added as an Activity elective for the 2018-19 school year. The hope is that more students will have the opportunity to participate in this exciting competition, and that it will lay the groundwork for continued success by Middle and Upper School students at MFS in the National History Bee and Bowl.