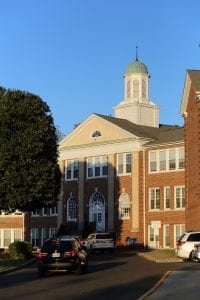 Throughout the school’s history, individuals have helped the school to grow in important ways. In the early years, families provided land for the school grounds and fields. As the need for improved facilities to support a robust educational program grew, as well as the need to provide permanent endowment resources to support the school, the school community has undertaken several major capital campaigns to raise the funds to meet these challenges.

A brief history of the major campaigns is listed below:

The Building Fund Campaign – In the 1950s, donors contributed $250,000 to fund the construction of a new gymnasium and the Upper School annex of classrooms.

The Chester Reagan Chair – From 1976 through 1978, donors provided nearly $320,000 to establish the Chester L. Reagan Endowed Chair in Faith and Practice. Now valued at well over a million dollars, this permanent endowment provides the resources to support the teaching of Quaker education in every grade. MFS has two full-time faculty members dedicated to teaching Quakerism, and supporting the growth and development of Quaker values in the school community.

Toward Our Third Century Campaign – Conducted in the mid-1980s, this effort secured more than $1 million from parents and alumni to build Stokes Hall, which connects the Lower School and Upper School facilities. The libraries of the three divisions were centralized in the Woodward Henry Diller Memorial Library on the top floor of Stokes Hall.

Campaign 2000 – Assuring the Future – More than $2 million dollars was given to MFS for this campaign from 1996-98. The effort included $500,000 raised over two years for the Annual Sustaining Fund, and resources to build the Dining Hall/Commons, create two computer labs, and establish the Endowment for Faculty Support.

The Campaign for Arts, Athletics and Endowment – This effort, which began in the fall of 1998 and closed in June 2003, secured more than $6,865,000 in gifts and commitments from the school community. The largest MFS campaign to date, it included the school’s first $3 million contribution and challenge match. The effort provided the resources for the construction of the new Field House and the renovation of the Arts Center. In addition, 19 new endowed funds were established during the campaign to provide resources for scholarships, professional development and faculty salaries.

The Woodward Henry Diller Memorial Library Enhancement & Renovation Special Gift Effort– During the 2002-2003 school year, MFS secured more than $425,000 to completely renovate the Diller Library, retrofitting the space to better support the new technological resources the library now offers to students and faculty. The Check It Out @ The Library Parent Council auction in the spring of 2003 provided important funds for the project, as well as donors who helped the school reach a challenge match from the Edward E. Ford Foundation.

Great Classrooms for Great Kids - This campaign raised $7 million to dramatically increase the number of classrooms and labs in the Middle and Upper School. The results of this effort, which ended in 2012 included Hartman Hall – the first new classroom building at MFS since the 1960s; three new labs for chemistry, environmental science, and robotics/physics; the Mecray Courtyard; a new tennis court; and the McShap Path which connects Hartman Hall to the Field House and Mecray Courtyard.

Endowment - As part of an ongoing effort to double the size of the school's endowment, MFS announced in March 2016 that $3 million had been raised in endowed scholarships for the Camden Scholars Program. In recognition of Head of School Larry Van Meter's retirement in 2018, more than $1 million was secured for the Van Meter Camden Scholars Endowment and other endowed funds.