In Remembrance of Aaron M. Price 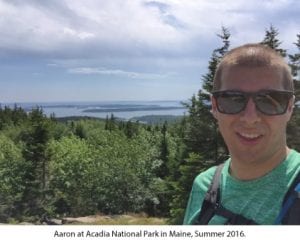 Aaron Michael Price, MFS Class of 2007, was born April 12, 1989 and called Moorestown his home for 27 years.  He enjoyed a large loving family and countless friends.  Each could always count on Aaron’s love, caring, authentic and adventurous spirit.  Unfortunately, he died tragically on his trail motorcycle in the Pine Barrens of New Jersey on November 13, 2016.  He is the beloved son of James L. and Deborah L. Price and brother of Megan Claire Price.  He is survived by his maternal grandparents, Stan and Claire Basara, by many aunts, uncles and cousins, and many trusted friends.  He will not be forgotten.

The Price Family has opted to honor and memorialize Aaron through Moorestown Friends School because of “its transformational academic programs and its Quaker based ethical and moral teachings, which enabled Aaron to grow and mature into a confident and bright high school student.”  Aaron began his journey at MFS in 9th grade in the fall of 2003.  Academically, Aaron excelled in advanced coursework in calculus, physics and computer science.  However his intellectually abilities were not only defined by theory or text books, rather he learned by doing, building, repairing.  In an interview with the Dean of Engineering of Rensselaer Polytechnic Institute, Aaron said, “I like to take things apart, figure out how they work and put them back together.”  Moorestown Friends School supported Aaron’s interests in building and fixing things, as he sought out opportunities in electives such as engineering design, advanced woodworking, rocketry, robotics and slot car engineering.  Aaron’s woodworking skills and desire to build with his hands encouraged Head of School Larry Van Meter to invite Aaron to be one of a few students who worked on the Hollinshead Clock project.  Beyond the classroom, Aaron enjoyed the opportunity to play soccer and golf throughout high school.  His athletic career was highlighted by playing 4-years of varsity golf and being a team co-captain during his senior year.  He relished the sport of golf and would continue to do so throughout his life.

Aaron matriculated to Rensselaer Polytechnic Institute in the fall of 2007 and graduated in 2011 with a Bachelor of Science in Mechanical Engineering, with a focus in Thermodynamics.  While at RPI, Aaron continued to live beyond the classroom as he actively participated in the Rensselaer Sports Car Association, the Down Hill Mountain Biking Team, and the fraternity of Phi Sigma Kappa.  He also spent many hours skiing the mountains of Vermont with his RPI friends.

His initial summer jobs at Ward’s Automotive and Mill Street Tire helped inspire and refine his love for mechanics and engines.  Later he worked several undergraduate internships at Urban Engineers, a Philadelphia based engineering firm.  Upon graduation, Aaron was employed as a Mechanical Engineer at Urban’s office in Philadelphia.  He continued to work for Urban for each of his five years after graduating.  Significantly, during those years, he enjoyed living at home with his parents and sister in Moorestown.

An avid outdoorsman, Aaron loved to ski, mountain bike, play golf, and ride through the New Jersey Pine Barrens in his rugged 4-wheel drive truck and his trail motorcycles.  The thrill of the adventure was always followed by his passion for cleaning, fixing, maintaining or re-building his many vehicles.  These many and varied interests blessed Aaron with a wide circle of friends quilted together by a common thread – adventurous and fun-filled time spent with Aaron.

Aaron was uniquely inspired by his sister Megan.  He loved her dearly.  He knew of the challenges she faces and he could openly express his love for her to his friends and family. Impressed by the support she and his family have received by the Githens Center, the Burlington County ARC and many others, Aaron was compassionate and  committed to supporting individuals with disabilities, serving as a volunteer and a fundraiser.

Aaron was loyal, kind, loving and caring to his parents, sister, family, and to so many wonderful friends.  His loss is profound and he is deeply missed.

Aaron lost the opportunity for a long love-filled life and to build a legacy of his own.  Nonetheless, he did build the foundation for a legacy that will be enriched by his family and friends.   Moorestown Friends School is honored to collaborate with Aaron’s family and friends to establish a scholarship endowment in celebration and in remembrance of his life.